Off On Another Adventure

If all goes according to plans, our daughter and I are off this morning on another adventure. We take one every Summer as soon as her school librarian job ends.

These Mother/Daughter road trips started about 8 years ago when she invited me to go with her on a trip to the Biltmore Estate in Asheville, NC. She had been there several times with a friend and had become enthralled with the place. So off we went on our first adventure. It was fun and I enjoyed the trip. Her love of the Biltmore continues to grow. And after spending a Summer as an intern in the Archival Library as part of her MLIS program, Vanderbilt just runs through her veins. Every year since, we drive South to her “happy place”.

But this year will be different. She has decided that she wants to explore the Vanderbilt legacy in Newport, Rhode Island. There are actually two Summer cottages that belonged to the Vanderbilts in Newport. The Breakers was the summer home of Cornelius Vanderbilt. It is a spectacular home and not what I would ever consider a “cottage”. The other Vanderbilt Mansion is Marble House, home to Mr. And Mrs. William K. Vanderbilt. I have no idea how they are related, but I am sure our daughter has the lineage down pat. She is quite up on everything Vanderbilt.

After a few days in Newport and the surrounding area – maybe a side trip to Providence, we are going to head to western Massachusetts to see her adopted Gramma. Gramma Betty is 94 and now lives with her son and daughter in law. It has been eight years since they have been able to visit. This is a big surprise for Gramma Betty and I know she will be thrilled. Her DIL knows we are coming, so we don't have to worry about her not being home.

The final leg of our journey, after a stop over in Albany, NY to visit my Godson and family will be the Vanderbilt Mansion National Historic Site in Hyde Park, New York. This mansion was used primarily in the Spring and the Fall. In the Summer the family headed to Newport.

This home is a bit different from the Newport ones as it is part of the National Park Service. The homes in Newport are part of the Preservation Society of Newport County. The Biltmore Estate in Asheville is owned by the Biltmore Company and run by family members.

Five days spent with our daughter will be fun. We aren't really Mother and Daughter on these trips, but rather two friends having a good time. Of course one friend is considerably older than the other. And the younger one makes sure the older is fed and rested and having a good time. And the older one occasionally checks the speedometer.

Seeing all the grandeur of by gone days is interesting. But getting back to our own nests will be good too. It is fun to see how the elite lived, but it is better to enjoy how we live in our own little homes and apartments.
Posted by RobinsFlight at 7:00 AM 2 comments:

AT THE CA BUTTON SOCIETY CONVENTION 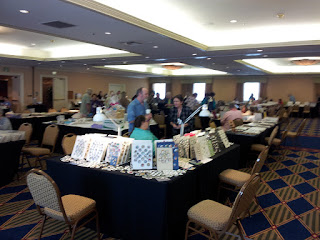 On May 16th of this year, I was at the Burbank airport in California, eagerly awaiting the flight that would take me north to San Mateo and the California State Button Society convention.  I was looking forward to four days centered around the hobby of button collecting.

When I tell people I collect buttons, the response is generally one of polite perplexity.
"You mean button buttons?" they ask.  "The kind that are on clothing?"
"Yes," I respond.  "But the ones I collect are vintage or antique." I attempt to describe the various types of buttons used in certain periods of history, but after a few moments realize it is as futile as trying to describe the work of Da Vinci, Monet, or Jackson Pollock.

So, on the previously mentioned day last May, I made the trek to the convention at the San Mateo Marriott Hotel, to visit with a community of people who share and understand my passion for buttons.

On Thursday, the first day of the convention, many Button Society members (myself included) were busy putting the final touches on the collections of buttons to be entered in the competitions on
Friday.
"Competitions involving buttons?" one might ask.  "How does that work?"
I won't attempt to describe the intricacies of the competitions (or Awards, as they are called).  To sum up, this year there were 70 Awards Button Society members had the option of entering.  Each Award requires a certain type, size, and number of buttons mounted on 9" x 12" medium weight board.  A group of knowledgeable members judge the entries using a point system.  The points are added up, and first, second, and third prize ribbons are awarded, along with small cash prizes. 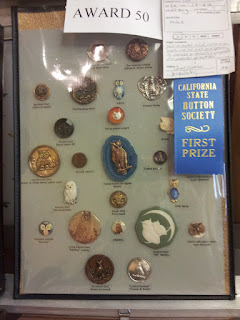 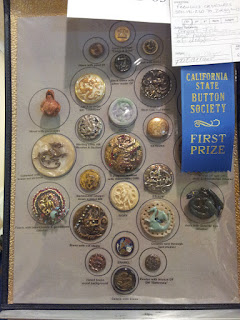 One of the aspects I love about button collecting is the hunt for particular buttons.  When the showroom opened on Saturday (to the public as well as members), it was difficult to decide where to start looking.
There were twenty-three dealers, or sellers, this year.  The less expensive buttons are in various piles, called "pokes", because buyers are allowed to poke through them.  The more expensive buttons are mounted on the same 9" x 12" board used in competitions.  I have to admit I did buy a few of the expensive buttons!

Saturday night we had our Society dinner.  Dinner was followed by an auction of donated items, to make money for the Button Society.  It was entertaining to see friends good-naturedly attempt to outbid one another.

Sunday morning the Awards breakfast was held.  Winners were announced, and the cash prizes handed out.
After breakfast, the showroom was again opened to the public.  I took advantage of those last few hours and continued my hunt.  I bought several more lovely buttons.  At one point I came upon a particularly nice button and looked at the price.  It was $1,200!  I quickly put it back.
The showroom closed at 3 o'clock.  It was time to pack and head for the flight home.

Next year the convention will be held in San Diego.  I'm anticipating it already!