Today we have a guest blogger from our Friends team, affectionately known to us as Topaz.  She and her sister have two Etsy shops: TopazTurtle and TwoCrackedJars. 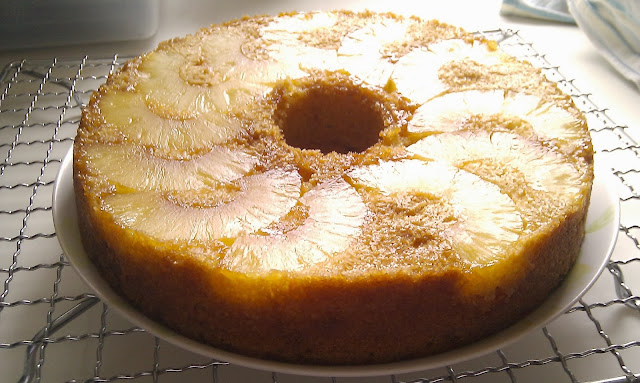 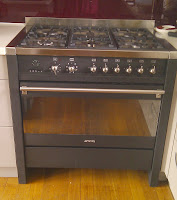 This beast of a stove and oven in my new house had me pulling out baking tins packed away for the move .


With limited pantry options (until I do my next grocery shopping trip), I settled on this easy pineapple upside cake to put this oven through its paces. I never have been a fan of this cake, being more pudding in consistency rather than cake in my previous attempts to make it. However, this time it turned out as a soft and fluffy cake delicately balancing moist pieces of pineapple. I am definitely making this cake again.

Beat the extra butter and sugar until light and creamy
Gradually add each egg, beating well after each addition
Add the vanilla and beat until combined.
Fold in the flour alternately with 1/3 cup of the reserved juice

Spoon the mixture evenly over the pineapple and smooth the surface
Bake for 30-40 minutes or until skewer comes out clean when inserted into cake
Leave in tin for 10 mins before turning out onto a wire rack to cool. 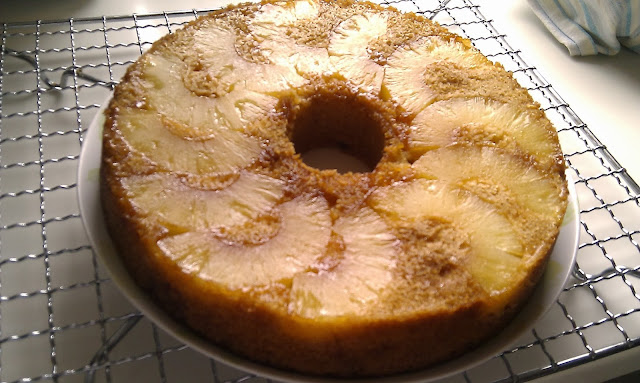 Posted by RobinsFlight at 5:00 AM 3 comments:

Science for Kindergarteners (and the rest of us): Magnets

Last month I posted about a set of science experiments on color that I did in my son's kindergarten class.  This month I returned with another set of experiments to try, this time working with magnetism.

The classroom already has a few activities that involve magnets.  My favorite is this floating magnetic ring set.  It has disk magnets that can fit on a stand which also has a disc magnet in its base and a point sticking up from the base that will fit through the holes of the magnets- like a magnetic ring toss.  Because the poles of the magnets are on the flat sides, they either attract or repel based on which sides you put together.  By stacking the magnets so they are repelling each other they float.  And giving a gentle push to the top one, you can make the magnets jump quite far into the air.

Because they had already talked about magnets in class some, I decided to try some experiments that took their understanding a bit further.  We magnetized needles to create our own compasses and made electromagnets!

First we reviewed a bit.  Magnets always have two poles, a north and a south, or put another way, a positive and a negative.  They are magnetic because the free electrons within the atoms they are made of are all spinning in the same direction.  This creates a magnetic field that attracts other substances that have free electrons that are easily adjusted based on that field, such as metals like iron.

Here comes the fun part:  You can make a magnet out of something that is attracted to a magnet, like a metal needle or a nail.  We used embroidery needles.  Hold the needle firmly at one end (for some of the kids it was easier to hold the needle against the table).  Then take a magnet and stroke it down the needle, using only down strokes (pick it up and the end and start back at the top).  Do not turn the magnet while you are doing this, but keep the poles aligned the same way with each stroke.  Depending on the metal you are using and the strength of the magnet, this could take 50 strokes or 150.  How does this work?  The magnet being rubbed on one direction down the metal needle gradually 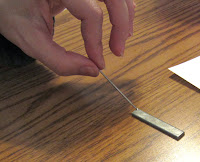 Test your new magnet with another piece of metal to see how strong it is.  If you want to use it for a compass, it only needs a slight pull towards the metal.

The earth also has a weak magnetic field and magnetic north and south poles.  The magnetic bar in a compass is attracted to the opposite poles of the earth, allowing it to find due north.  To make a compass out of your new magnet needle, fill a bowl with water.  Float a lightweight object like a bottle cap or a cork (in the pictures I used a milk jug lid) on top of the water.  Carefully place your magnetic needle on top so it can spin.  One end of the needle should point north and the other south.  In the picture, you can see that I labelled a paper with the compass points for our demonstration.

So making a compass is pretty cool.  And we learned about electrons moving in the same direction.  Well, what else has electrons moving the the same direction?  You guessed it...electricity!  The current running through a wire wrapped around a nail will actually align the spins in those metal atoms in the same way that the magnet did with our needle, but this only happens while the current is flowing.  Once the current stops, the magnetic field in our nail is gone again.

To make an electromagnet, you will need a D cell battery, a piece or two of coated copper wire about 9-12" long with the ends stripped, an iron nail about 3" long, and electrical tape.  First, coil the wire

around the nail a few times.  Depending on the gauge of your wire, this could be a big difficult.  The wire we used was a bit on the thick side, I think.  It doesn't matter whether the wire is coiled clockwise or counterclockwise, but the coils can't overlap each other.  The more coils you make, the stronger your magnet will be.  In our experiments we used a wire with 5 coils and a wire with 10 coils and tested each one.

Next, use electrical tape to attach the stripped ends of the wires to the battery.  I found that the wires still tended to slip out from under the tape unless I held them.  Be careful, the ends of the battery can get hot, so you won't want to hold them for too long!  A pair of wooden tongs would have been a useful tool for this experiment. 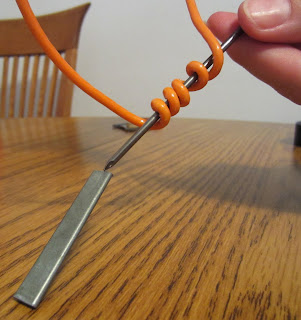 In our experiment, the wire coiled 5 times magnetized the nail enough to lift up the end of this small piece of metal, but not enough to pick it up off of the table.   (See picture to the left.) 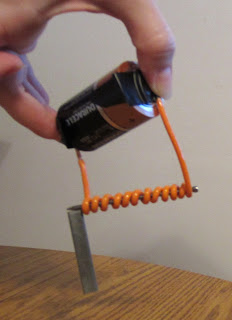 But when we used the wire coiled 10 times, the magnetized nail was strong enough to lift the piece of metal off the table and hold it suspended in the air.  How cool is that!?  (See picture to the right.)  It also got hot a lot faster.  We also tried connecting two batteries in sequence to the 5 coil wire.  It seemed somewhat stronger than with only one battery, but not as strong as the wire with more coils.

The kids had a lot of fun with this one, and I did too.  I'm not sure what the next science day will hold, but I'm sure it'll be interesting.  And now, where did they put that floating magnetic ring set?  I want to make some magnets fly!
Posted by RobinsFlight at 7:00 AM 4 comments:

Saying Goodbye to an Old Friend 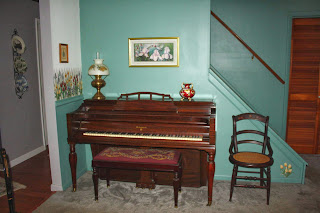 One of the things I always wanted when I was a child was a piano. I so wanted to learn to play the piano. One year I asked everyone to please contribute to my piano fund – I was maybe 10 years old. Unfortunately, not many in my family had the extra dollars to do that. So that goal was never realized.

When I was in college studying for my teaching degree, one of the courses I had to take was elementary piano. Every elementsry school teacher back then had to be able to pluck out a tune. So I learned the very basics and practiced on a piano in the music lab at school.

In the early 90's a dear friend was facing a nursing home and breaking up her home. She asked that I take anything she had and I would like to have. There in her living room sat the piano I had admired for the last 15 years of our friendship. Could it be that finally 50 years later I might really have a piano? I said I would love to have the piano and it became mine. Finally........a life long goal had been reached!

But just as there is a bright side to things, there is also a dull side. Soon after this wonderful piano took up residence in our home, my hands became so crippled with arthritis that playing was out of the question. For 20 years I have looked at that piano every night on my way to bed and thought about my friend. When I came downstairs in the morning and hundreds of times in between that piano was a reminder of my generous friend.

It seemed happy in its corner, but no one was really enjoying it. So on Tuesday, my long desired piano went to a new home. Our church was in need of a piano. They have someone who can “tickle the ivories” and make it sing again. (The keys are genuine ivory.) I am so happy it will have a new home, happy that people will be able to enjoy its wonderful sound. I am happy that this piano my friend loved and so generously gifted me  is going someplace that will make her happy as well.  We met in church and now, in a way, we will continue to meet there. And I am happy that one more large item is gone from our home. (Downsizing is not easy.)

When I told my sister what I had done, she made a comment that I think is kind of funny. “Leave it to you to find a home for it where you can keep your eye on it!”

Posted by FabricGreetings at 4:00 AM 2 comments:

I found this recipe, via pinterest, on the Mennonite Girls Can Cook website, and apparently they found it in an old Kraft cookbook.  But, as usual, I can't leave a good recipe alone, so I've modified it somewhat.
These cookie bars are amazing.  The first time I made them, they were gone before the chocolate chip cookies that were also in the house had been finished, which is saying quite a lot in a house where a batch of chocolate chip cookies has an average lifespan of maybe 2 days unless they're rationed.  They mix up very quickly and they're versatile, at home on a holiday cookie plate or in a lunchbox.  And definitely open to substitutions- at the bottom I've included a few ideas, but feel free to experiment yourself too! 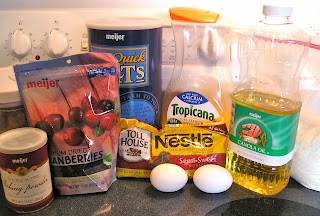 Preheat over to 350* F.  Grease 9"x13'x2' pan, or line with parchment paper.
In a small bowl or 2 c. measuring cup, combine dried fruit and orange juice.  Microwave for 30 seconds on high, set aside.
In a large bowl, combine oil and sugar.  Mix well.  Add eggs one at a time, mixing well after each.
Add oats, flour, salt and baking powder, mix until well combined.
Fold in fruit and juice, chocolate chips and nuts.
Spread into prepared pan.  Bake 20-25 minutes, until set and slightly browned.  Allow to cool completely before cutting.
If desired, before cutting, drizzle with melted chocolate. 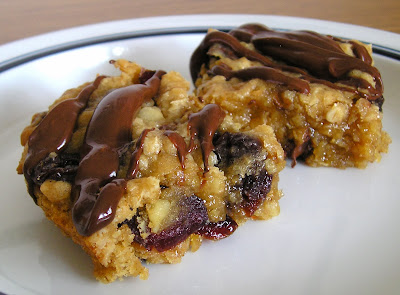 These would be good with the addition of shredded coconut along with or instead of the nuts.

Use white chocolate chips instead of milk or semi-sweet chocolate.

You could easily substitute other dried fruit for the craisins and cherries.  Try raisins, dates or dried apricots.

For a fun holiday touch, line the baking pan with parchment paper.  After bars are cool, remove from pan in one sheet, and use cookie cutters to cut out bars in holiday shapes.  Drizzle with melted white chocolate.