We would have to live in a bubble not to know that Valentine's Day will be here in less than a month. The B&M stores are already filled with hearts and chocolates and lacy things. And there is nothing wrong with that - if you are a hearts and lace and chocolate kind of person. However, there are some other great options available from shops on etsy.

I am a member of the FriendsofHeartsandHandsUnited Team on etsy. Our members are scattered across the world and their shops are just as diverse. What I am going to do here is introduce you to some great finds from these shops. They are not the traditional type of Valentine, but are gifts that would be well used, enjoyed and appreciated.

Our team leader runs Robin'sFlight - a shop
that is well stocked with lovely crocheted
purses, wallets and gadget bags. Everyone,
young and old alike can use a gadget bag. So
take a look.www.RobinsFlight.etsy.com


If your special person is at all crafty or sews, then something from this shop is sure to please. The shop is called Sewsouk and is run by a Brit living in Morocco. The shop is www.Sewsouk.etsy.com and is chuck a buck full of colorful items.


Jeanie is a knitter and her shop features some wonderful cold weather items. Who wouldn't be thrilled with a knitted cowl or fingerless gloves to get through the rest of the cold weather. It sure isn't over yet. Be sure to visit www.JeanieBeanHandknits.etsy.com


Is your special someone into vintage? We have a vintage seller who specializes in vintage buttons as well as other items. Personally, I have never met a button I didn't like. She is well versed on buttons and can answer your questions. Her shop is www.NouveauxRetro.etsy.com

Jewelry is always considered the "go to" gift for this holiday. And we are lucky to have several jewelry shops on the team. Each has its own niche. You need to check them all out and find what works for you.

Getting married soon? Then head on over to KC's lovely shop. She specializes in unique wedding accessories not only for the bride, but for the groom, the attendants (male and female) and the parents of the bride. Her memory charms are a huge success. www.KCowie.etsy.com

We have a Southern lass who does very pretty dainty items. She has a flair for the flirty but with a lot of class. Trish runs www.JewelsbyTrish.etsy.com

Resin jewelry is the specialty of our Aussie member. Topaz offers a wide variety of colors and shapes with her resin accessories. The color combinations she gets are wonderful. Her shop is www.TopazTurtle.etsy.com  She is a busy one and also has a décor shop called www.TwoCrackedJars.etsy.com

Inspirational necklaces, definition necklaces and map necklaces can be found in a shop run by Lisa. Her pendants are not something you will find everywhere,
The shop is www.JewelrybyJakemi.etsy.com

How about a lovely piece of stained glass? There are so many ways you can use it - a sun catcher, a wall panel, a nightlight, a decorative box, a stand alone ornament. This shop is sure to have something special. Nancy runs two shops.  www.DesignsStainedGlass.etsy.com says it all.


Her other shop has a softer side and features fabric purses, pillows, cat toys and other fabric items.
That shop is www.NancyEllenStudios.etsy.com

We have another Aussie on our team. Belle also runs two shops - both very distinct and miles apart. If you have a cat, you will love what she offers in her shop www.Kiteepee.etsy.com  for your feline friend. She has just started offering kitty tee pees. They are wonderful as kitty hidey holes or litter box covers. And while you are at it, check out www.BeljaysFeltnArt for lovely scarves and belly dancing accessories.

April is on a roll with her magnet boards and organizing items. So if you are buying for someone who wants to stay neat and tidy, be sure to pop into www.MooreMagnets.etsy.com Her countdown calendars are also a huge success.


Last but not least are the shops I run. If you are looking to send a unique and special Valentine card, you will find some ideas in my shop. I also offer pillowcase greetings which work well for kids big and small. All of these can be found in www.FabricGreetings.etsy.com  If the special person happens to be an 18" doll then check out www.ADollsNecessities.etsy.com

So there you have it...a wide variety of items. Actually, there is something for everyone if you brose through those shops. And nothing says love like Handmade.

Posted by FabricGreetings at 5:00 AM 3 comments: 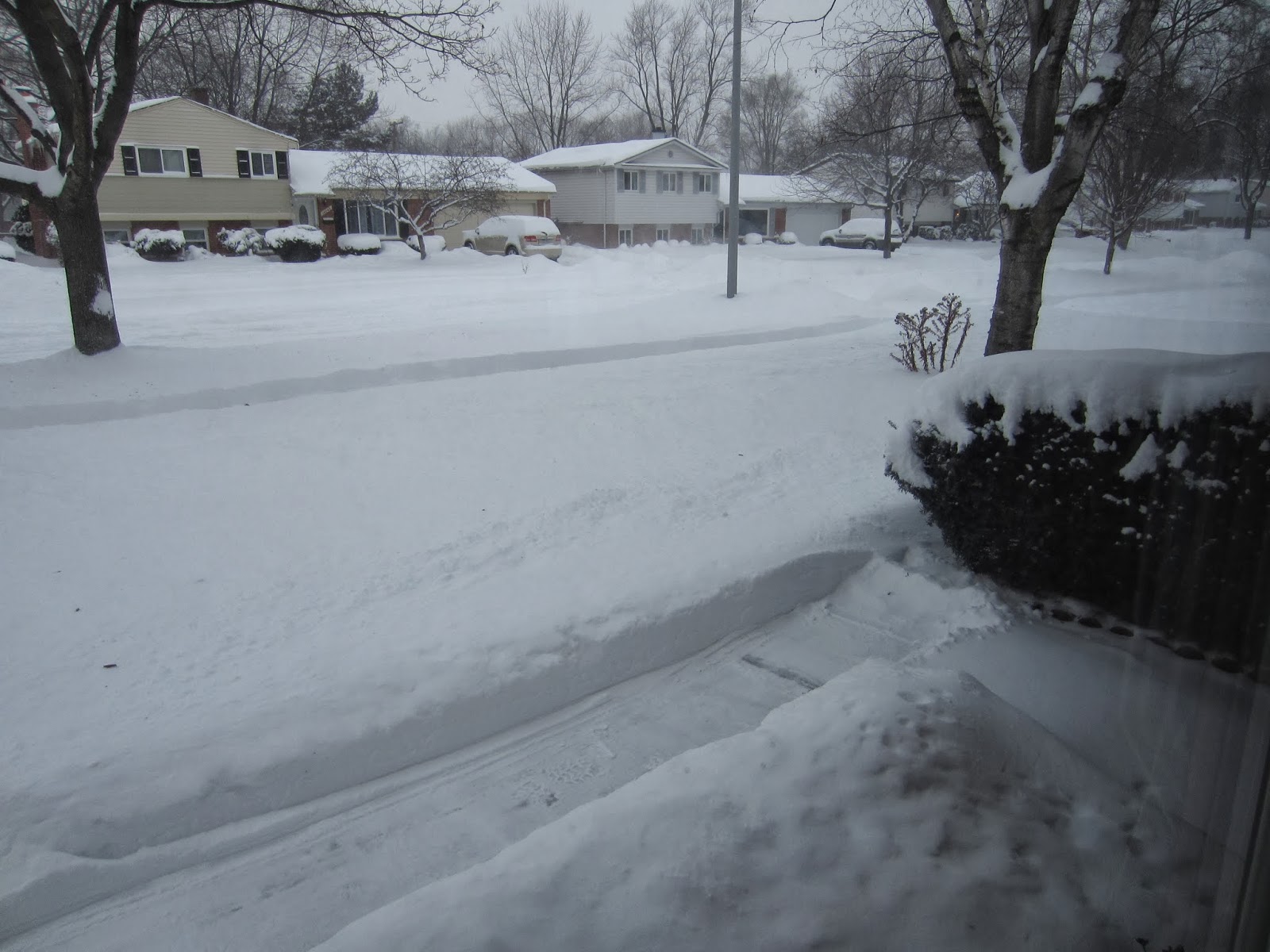 Like many in the United States, last week left us with more snow and colder temps than this area has seen in quite a while.  I know some parts of the country were snowier and more frigid than here in the Detroit area, but our 6-8" of snow, on top of the 6" or so that were already on the ground, was more than my kids had ever seen!  And 30 below (*F) wind chills...well, that had me remembering days when Michigan State University closed classes for a day back twenty years ago, and farther back, remembering walking to school in Wisconsin with friends, all waddling like penguins, we were so bundled up! 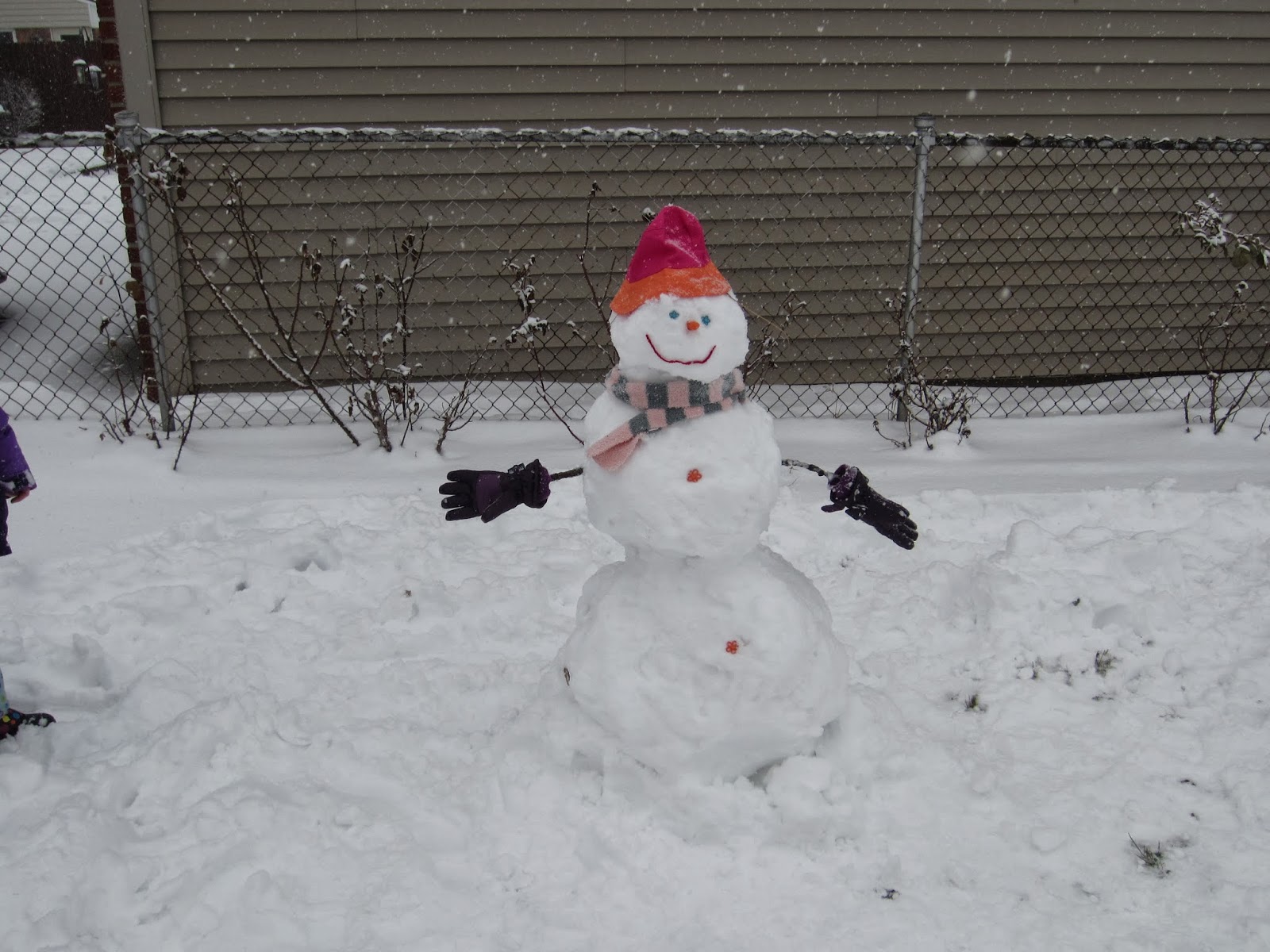 Our extended Christmas break, thanks to 3 snow days, left us with some extra time around the house.  And since there's only so long that 2 kids and a mom can handle cooped up indoors, we did venture out a bit.  Before the heaviest of the snow hit, the kids had fun making a snowman, complete with hat, scarf and a carrot nose.  The next morning he had to be dug out, of course- don't want our snowman suffocating under a blanket of snow! 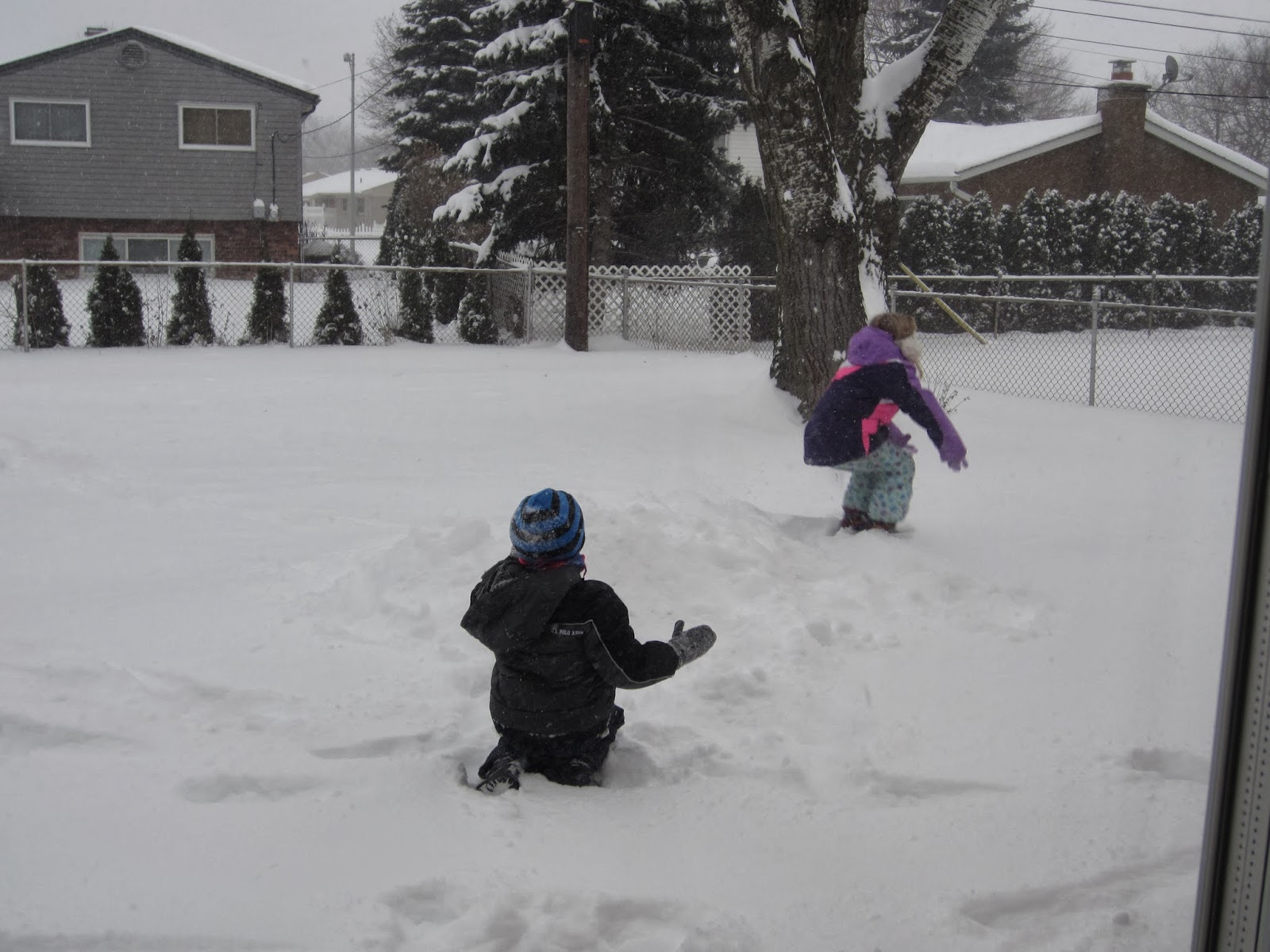 Then there's the general playing in the snow.  My kids are fond of building snow slides and doing their best of fall, flip, and push each other down.  And no snow day would be complete without a trip to the sledding hill.  Unfortunately, my camera didn't accompany us that day. 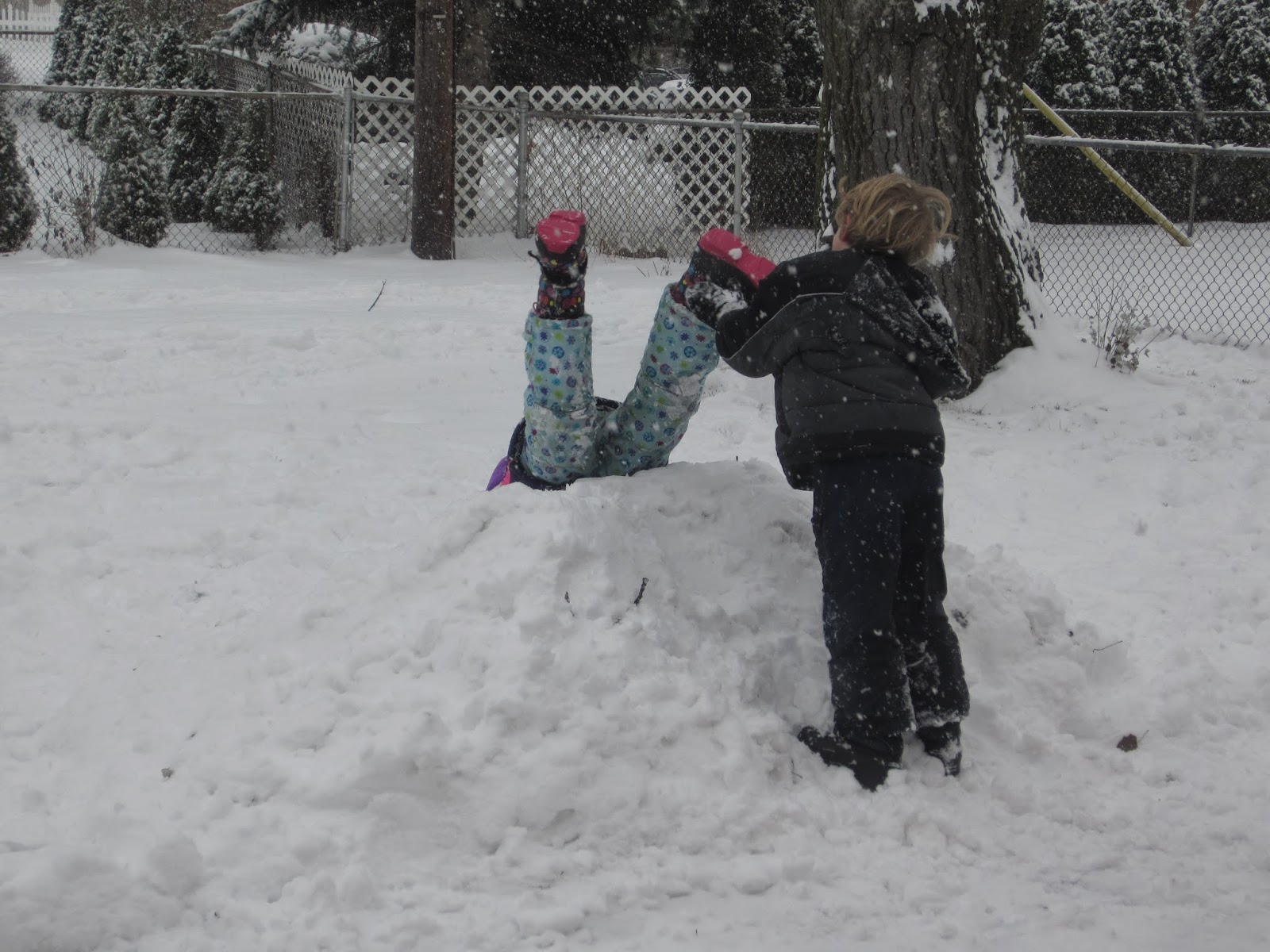 I think my favorite activity was blowing bubbles and watching them freeze.  Yes, I have to admit, the idea came from the now viral pictures by Angela Kelly that have been circulating on the internet.  But hey, what a great idea!  My photos aren't nearly as good as hers are, but it was fun. 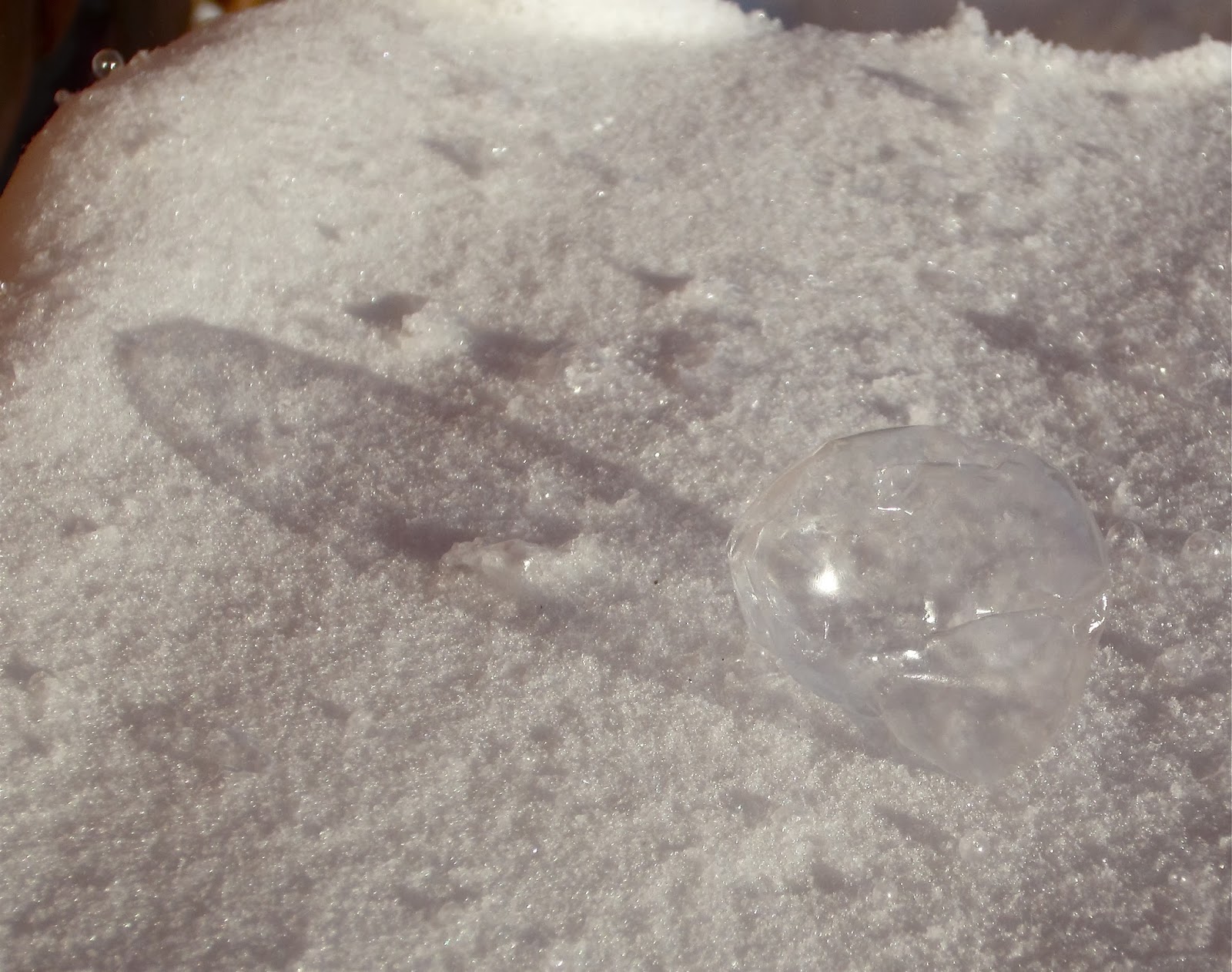 The temperature was -12*F, and there was a decent wind.  It probably would've been better if the wind had been lighter- it tended to blow the bubbles away with enough force that they'd just shatter when they hit something. 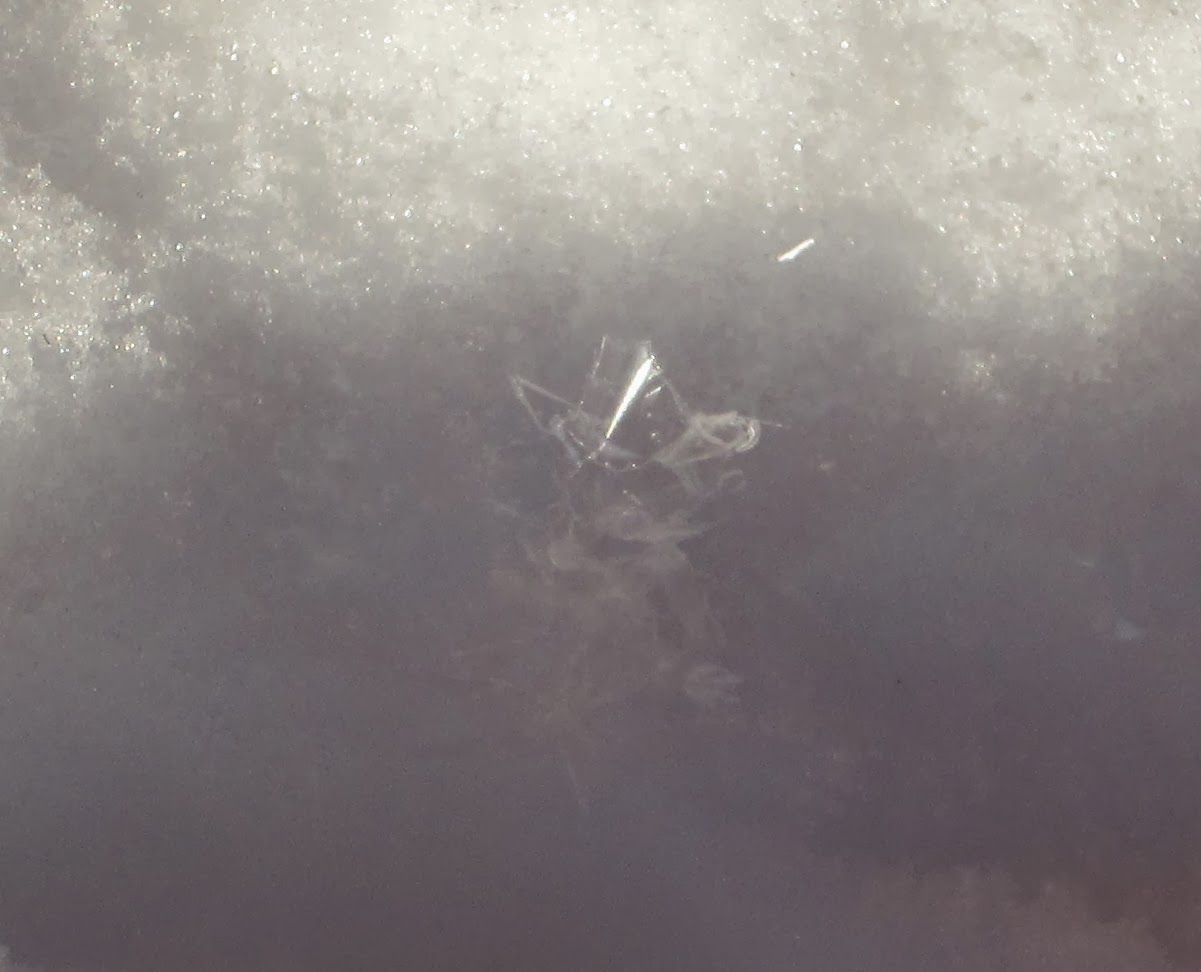 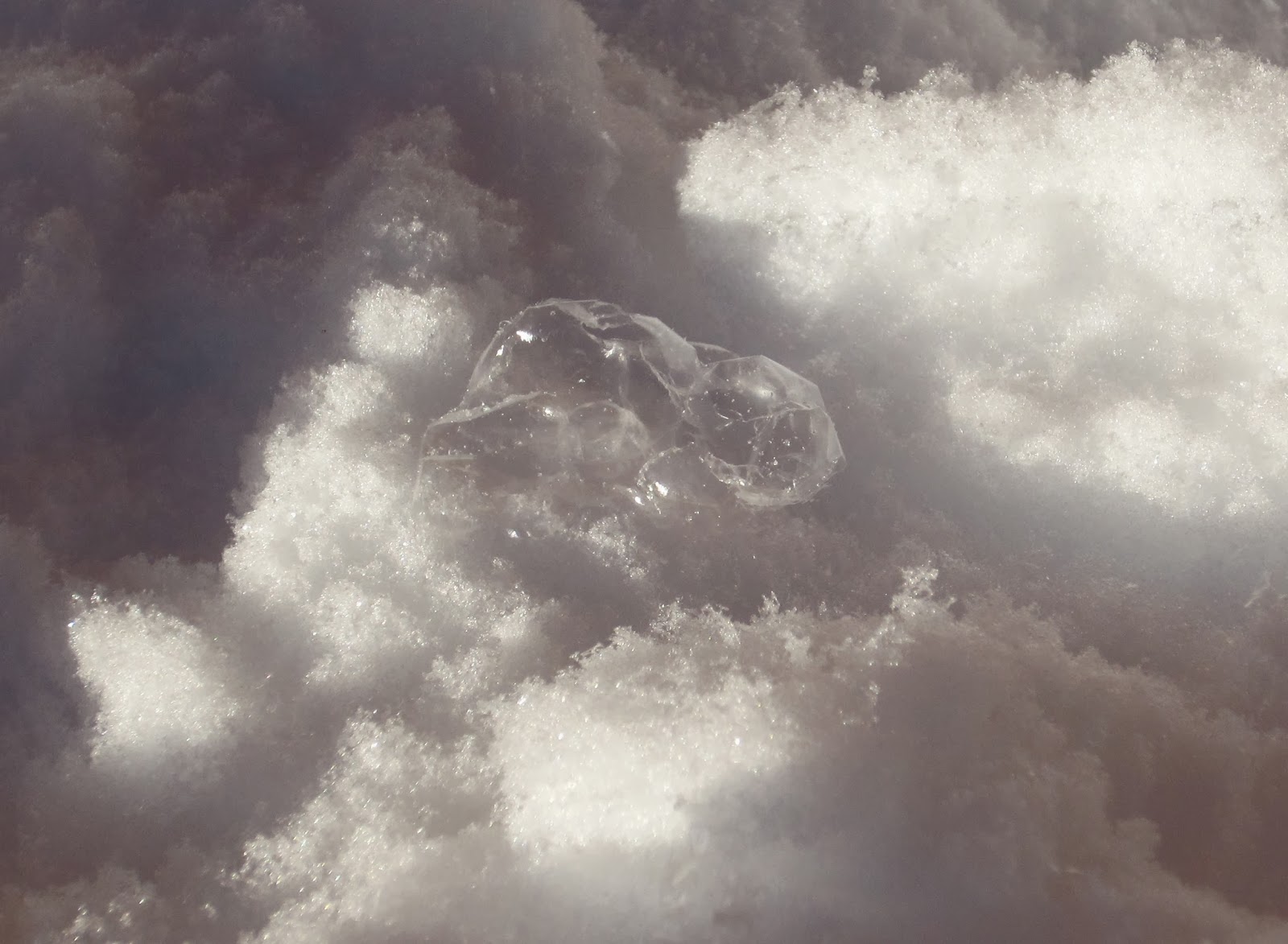 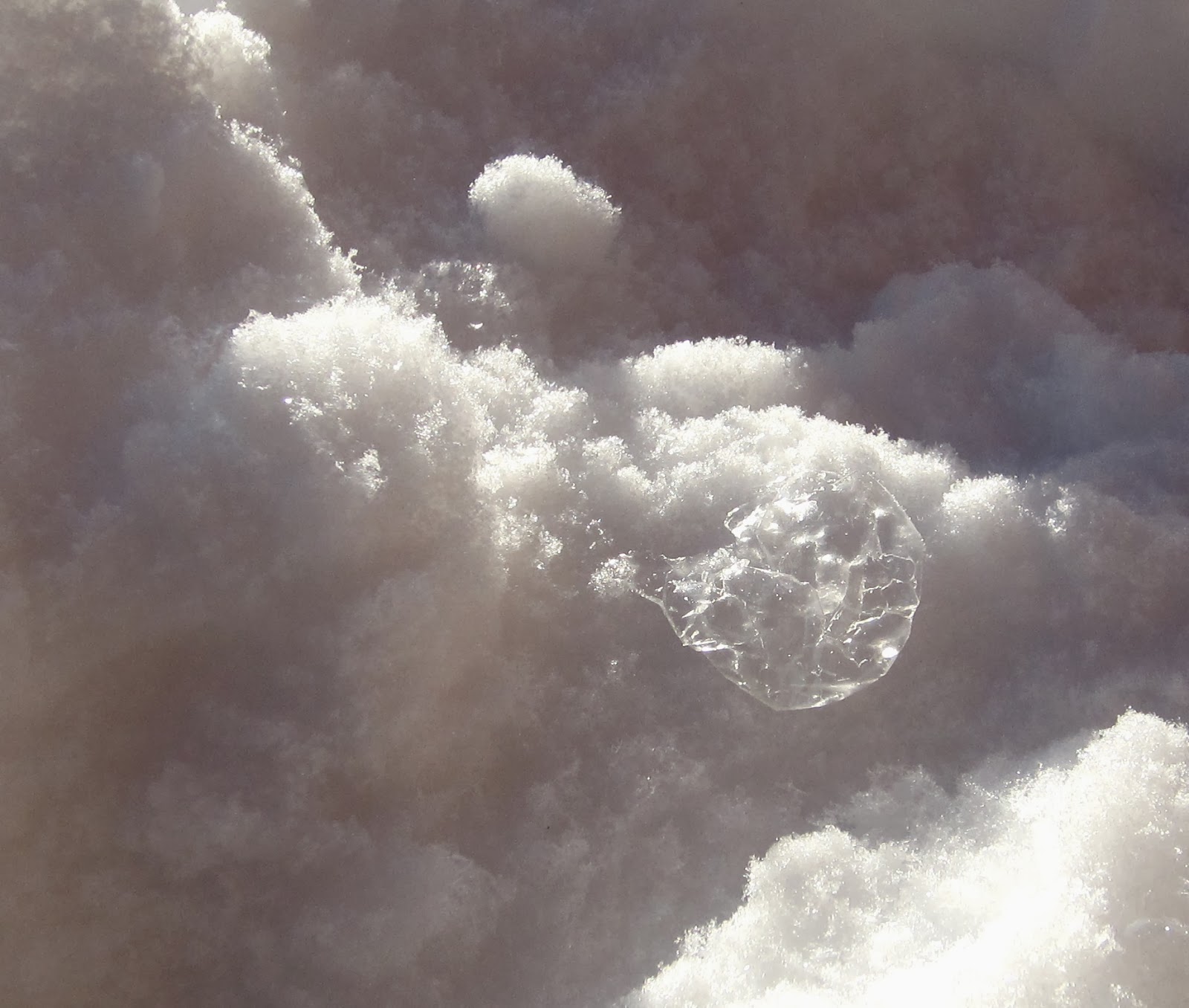 They froze almost instantly, not a slow crystallization.  I actually had to blow pretty quickly to got any bubbles before the liquid froze on the wand.  And the smaller bubbles definitely lasted best. 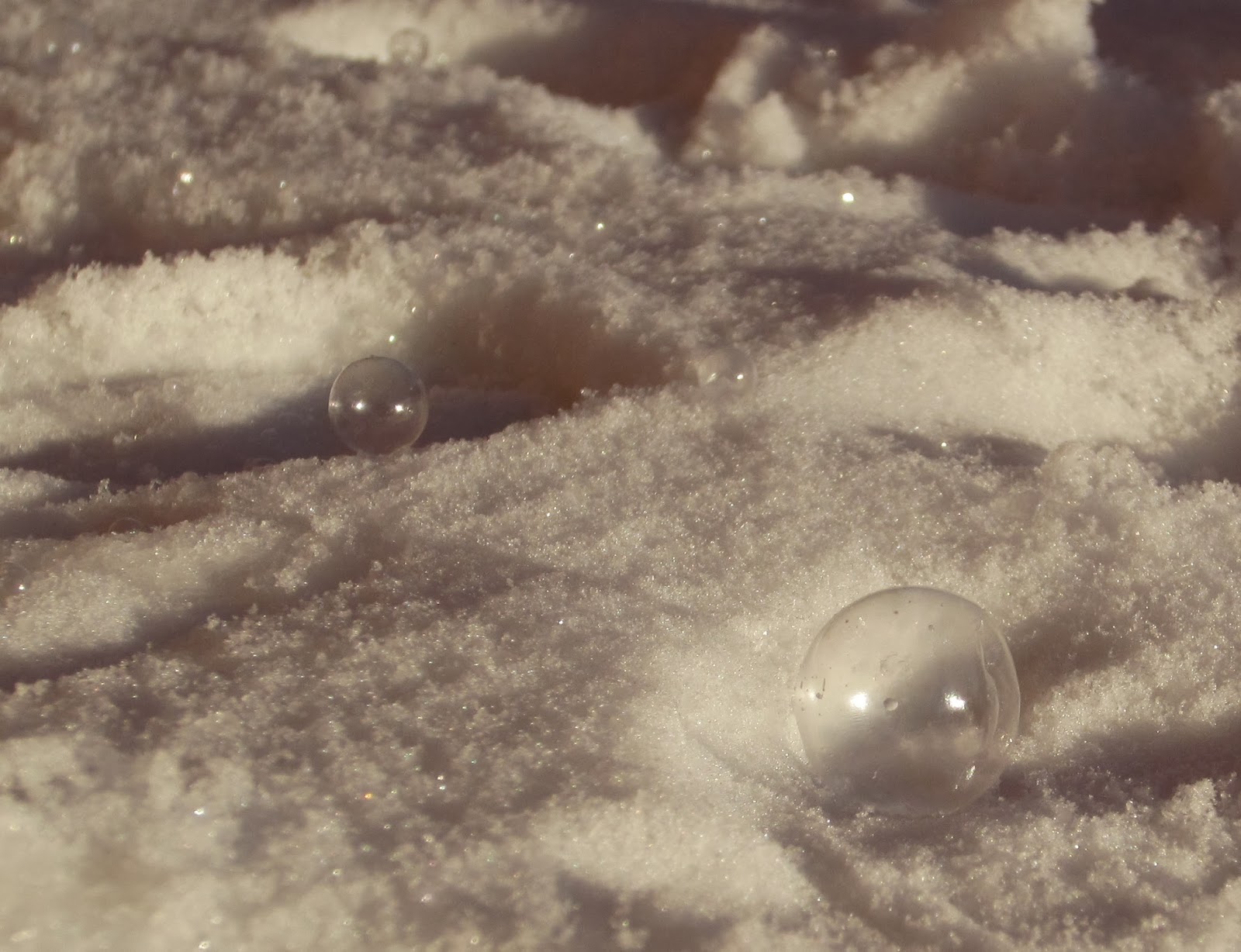 I tried it again the next day.  The wind was less, and it was warmer- I think about 6 *F above this time.  The bubbles froze more slowly, but they didn't seem to hold their shape nearly as well.  A few held together though. 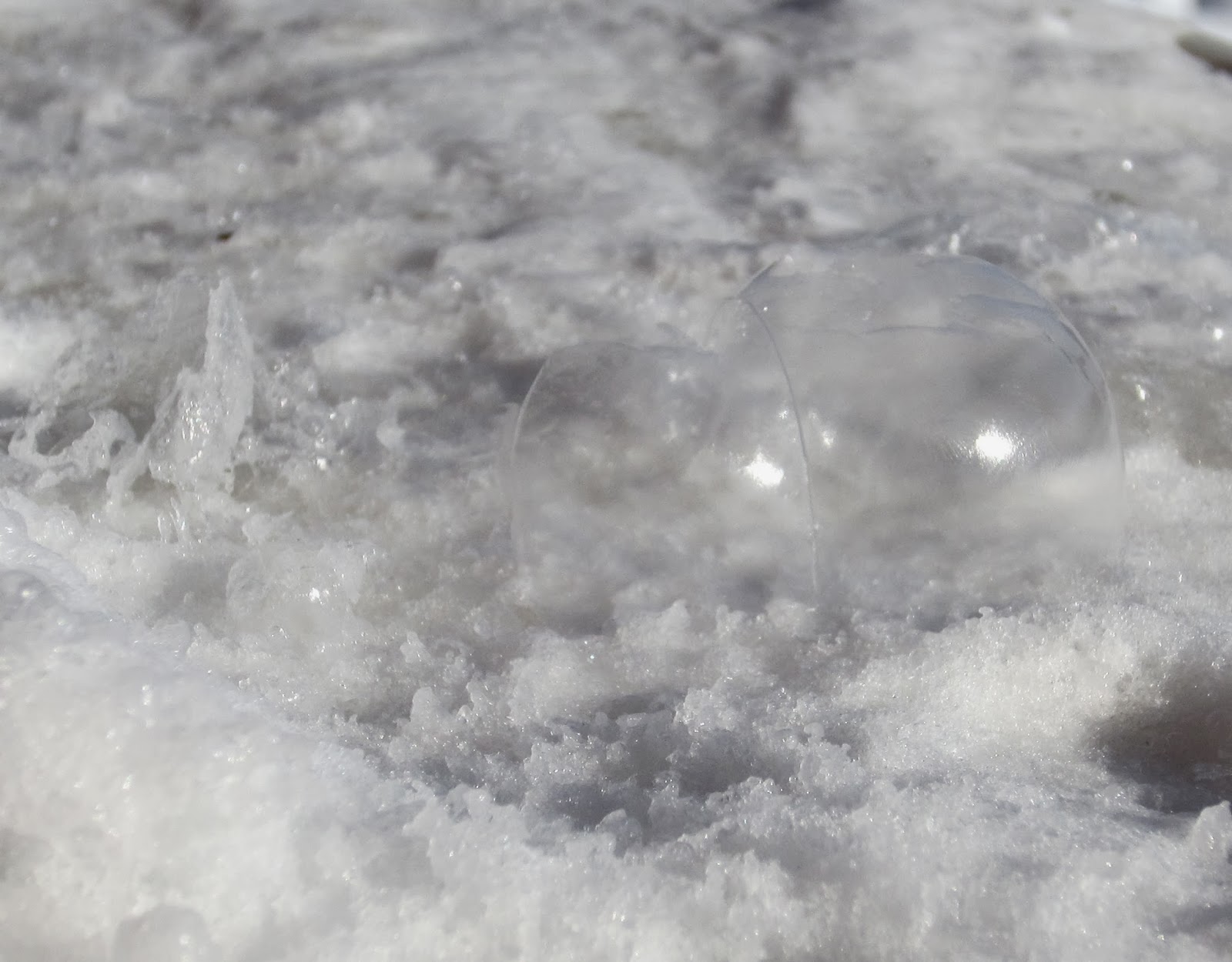 So what did you do to occupy yourself during the big freeze?
Posted by RobinsFlight at 7:00 AM 3 comments:

This was the twenty first year of the gingerbread house competition. It was started in 1992 with a small group of gingerbread houses built by community members. It was another way to celebrate the holiday season and no one expected it to happen again. Now it has become one of the nation's most celebrated events. The competition is fierce and the caliber of judges is astounding.

Although it is billed as a gingerbread house competition, the winner this year were animals. A pair of pandas eating bamboo was the grand prize winner. This creation traveled from Wisconsin for the competition. It was very hard to get a good photo as it was in a glass showcase with mirrors on the back. 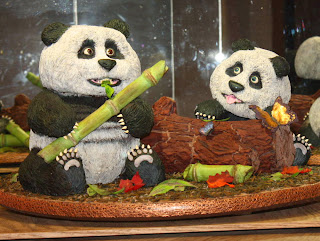 All items on the entry must be edible except for the base it is built on. Many were made of gingerbread and covered in fondant while others were very much bare gingerbread except for the decorations. So enjoy the show and maybe put it on your calendar for next year. It starts the week before Thanksgiving and runs through New Year's Day. There is a short period of time - I think the week of Christmas - that the top winners are taken to NYC for TV appearances. 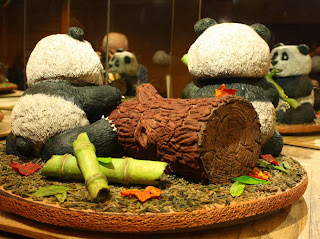 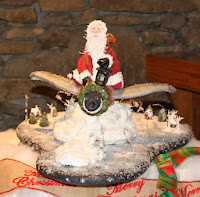 Santa is flying in on his Canadian Goose. 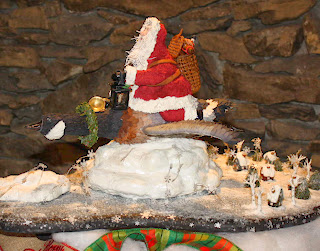 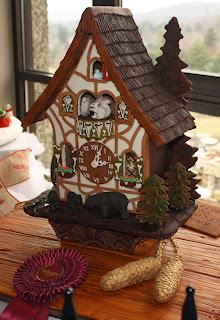 Can you see the mice in the clock? The clock weights looked like pine cones. 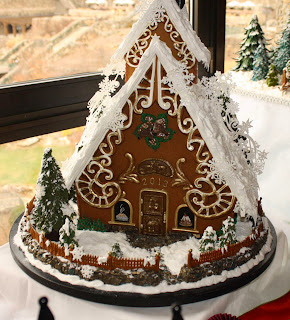 This was a very simple A-frame gingerbread house and then they added all the sugar work.  The snowflakes on the roof were a work of art. 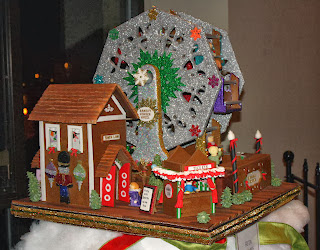 And what is not to love about a trip to the amusement park on the boardwalk? 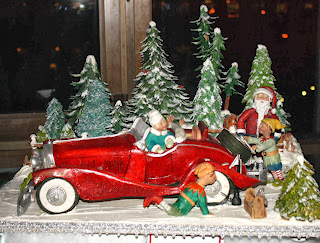 I think this was one of my favorites. The title was "I Should Have Taken the Sleigh". Can't you just see Santa and the misses zipping around in that sporty red car? 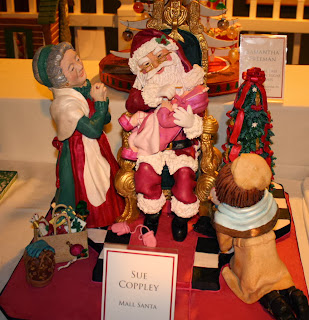 This one was called "Mall Santa". What a familiar scene these days. 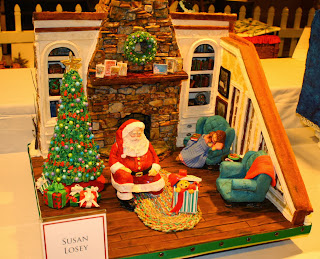 The details on this piece were incredible. You could stand for an hour and not see everything. Each book on the shelves was individually done. The cards on the mantle painted. There was a worn spot on the braided rug. Look at the stones in the fireplace. Talk about patience! 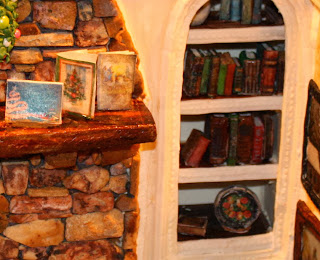 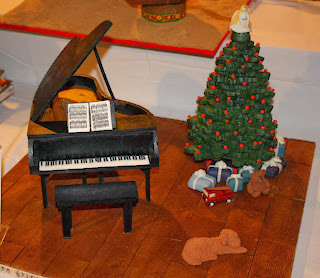 And one of my favorite. The simplicity of the scene is wonderful. It is called "Gingerbread in G Minor".
Posted by FabricGreetings at 5:00 AM 3 comments: