The 4th of July is just about here. Although Memorial Day heralds the official start to the Summer season, the 4th of July seems to be a bigger celebration. People flock to the beach, have backyard cookouts and scout out a good place to view the fireworks. All rites of the Summer holiday.

I am sure everyone has a special memory of this holiday. Does it involve a spectacular display of fireworks, a great cook out or a sunburn from too many hours on the beach? 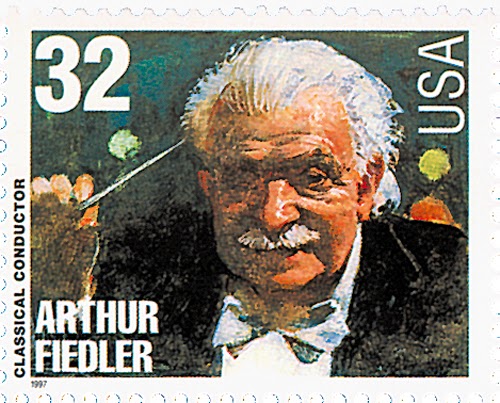 In my case it is a memory that spans a decade or more. And it was all done from the comfort of our living room. I absolutely loved watching Arthur Feidler conduct the Boston Pops Orchestra. The Pops always did a 4th of July concert on the Charles River Esplanade and it was broadcast on many PBS stations. Thousands of people would pack picnic suppers, grab a blanket and head to the grassy areas to wait for this free concert. A great display of  fireworks on the Charles River followed the performance.

Arthur Feidler was the conductor of the Boston Pops Orchestra for 50 years. That was longer than the 17 previous conductors combined. He is credited with making music fun and interesting. He was known for his popular and light classical programs.  And although I am tone deaf and had no idea what they were playing, watching him conduct was a thrill in itself.

The July 4, 1976 concert is recorded in the Guinness Book of World Records as the largest single audience for classical music concert. 400,000 people attended that concert. July 4, 1976 was a very special year.

Arthur Feidler was a spirited little man who always seemed to have a twinkle in his eye. He had a head of white hair that sometimes seems a bit unruly. He just had fun with his orchestra and himself. One of his biggest likes was watching the Boston firemen do their jobs. He often went to see firefighters at work when there was a fire in the Boston area. On his 75th birthday, his family presented him with his very one full sized fire truck....wonder where you keep something like that.

Arthur Feidler died in 1979. A 32 cent stamp was created in his memory. And for me, the music was no longer the same. He was followed by John Williams as conductor of the Pops. Certainly another great conductor, but in my eyes, not an Arthur Feidler. Somehow the 4th of July has lost a bit of its sparkle

Posted by FabricGreetings at 9:00 AM 2 comments: