There is much more to embroideries than may be seen at first glance. You have to look carefully to see the story they tell.

The first embroideries I saw were enormous French ones which filled almost the whole wall- you had to stand so far away to see what the pictures were that you lost the sense that they were made up of thousands of tiny stitches- they left me cold which is sad as they must have taken years of work by many, many gifted embroiderers.

Then my parents took me to Bayeux to see the embroidery of the Norman invasion of England - “The Bayeux Tapestry” and my love of embroidery began. Made from wool on linen and over 70 feet long its pictures wind round the room and show the journey from France, the fighting and even the arrow shot into King Harold’s eye . Although made a little later than the famous battle of 1066, in the 1070s, it nevertheless gives a fairly accurate portrayal of early medieval life- the soldiers’ uniforms stitched in minute detail- almost like a photo recording life at the time and what happened- a story full of interest to an historian as well as fibre artists.

Embroidery does not necessarily just tell its story through its pictures but can also do so from its colour, design , the type of yarn used and the style and types of stitches. It may tell of who made it, where they made it and who it was made for. For instance here in Morocco where I now am the embroidery from Fez is most often vibrant blue or black on white cotton fabric and is made up of tiny geometric shapes. 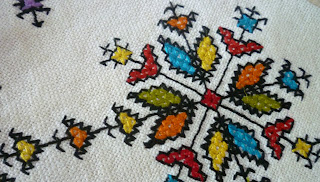 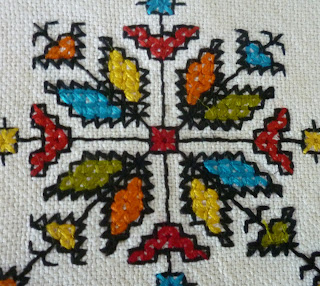 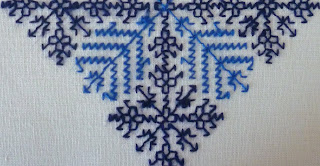 
and from Rabat embroidery is full of colourful flowers in satin stitch. Much embroidery shows off the skill of the craftswomen who made it. Families stitch the love and pride they have in their skills into the designs which were often traditionally made as a “wedding chest” for a much loved daughter or grand daughter and to show a bridegroom’s family of the quality skill and love of the bride’s family.

Embroideries can have hidden messages. Women stitched the names of their sweethearts or things they liked or were of interest to them into their work. Mary Queen of Scots famously stitched messages into her embroideries made during her years of captivity by Elizabeth 1 about politics, her favourites and rivals. World War 11 prisoners of war stitched hidden Morse code messages in embroideries supporting the King and insulting Hitler. These were so well hidden that the Germans even exhibited them in the prisoner of war camps!

Embroidery is ever changing with new designs, stitches created and new subjects. Technology is also embraced in modern embroidery to tell a story. Here is a sequence of embroidered texts from separate conversations about love

Next time you look at an embroidery take a closer look to see the story or message behind the stitches.
Posted by Sewsouk at 10:01 AM

Sewsouk- What a great informative article about embroidery.

Wow, I never knew there was so much behind needlework! Thanks for the enlightening information!

so interesting article, I've never thought so much History in this lovely work!!

I enjoyed reading this, and learned a lot in the process. Now, whenever I see embroidery, I'll look at it more closely.