Paths through the rock


Over the holiday break I had the privilege of visiting a number of the canyons and parks in northern Arizona and southern Utah.  The list included the wonders of the Grand Canyon, Bryce Canyon and Zion National Park.

Thankfully I had a large storage card for my camera, because over the course of the week I took over one thousand pictures.  Amazing as the sights at these three parks were, and they were truly incredible, the place I took the most pictures in the shortest span of time was not any of these three.  That distinction belongs to Lower Antelope Canyon.  Indeed, my visit there may have been one of the most amazing single hours of my life. 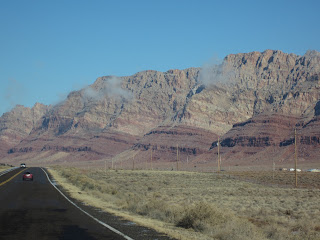 Lower Antelope Canyon is part of a slot canyon system located near Page, AZ, on Navajo lands.  Also called "the corkscrew," in the Navajo language it is called Hasdestwazi, which means "spiral rock arches."  Its sister Upper Antelope Canyon, located a short distance to the south, is called "the crack."  The Navajo name, Tse' bighanilini, means "the place where water runs through rocks," and here you find the origin of these amazing landforms.  In this desert land storms frequently cause flash floods.  Over time the raging waters have eroded the soft sandstone of the region, leaving amazing rock formations below the surface.  The slots in the ceiling of the canyons allow the sunlight to enter and illuminate the formations in breathtaking contrasts and shadows.

From what I have read, Upper Antelope Canyon is more frequently visited, and is much more accessible than the Lower canyon.  The floor of the Upper canyon is wide, and visitors can walk right into the formations without an elevation change.  But in researching for the trip, I also read that, while more strenuous, some 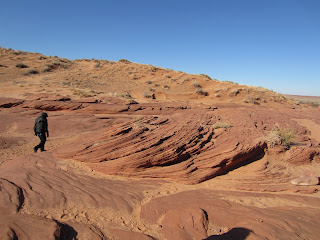 consider the Lower canyon's rock formations even more stunning.  Always up for a challenge, we opted for the Lower canyon tour, and dutifully printed out the map from Ken's Guided Tour to direct us.

The approach to the "entrance" of the tour was a bit dubious.  An unmarked drive off a narrow paved side road led to a gravel parking lot with a few portapotties lining one side.  A few Navajo men sat in a small shack, while a handful of visitors huddled against the chill along a split rail fence.  But the attendant at the booth was friendly while collecting our tour fees and having us sign an attendance form (presumably to be able to identify who was in the canyon in the case of us being swept away by a flash flood).  He also gave us information about the Upper canyon tour, in case wanted to see that one after we were done, with a clear bit of friendly rivalry about the "competition" thrown in.

Our tour guide, dressed all in black with a hood and face mask to shield him from the brisk wind, looked oddly like a Ninja.  But he too was friendly, and we chatted a bit as we walked across the contoured rock for a few minutes to the actual entrance to the canyon.  I was glad he was leading- there were no obvio 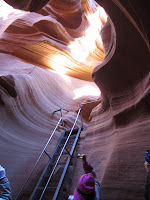 us markers as to where we were going.  Once we reached the entrance, it was a bit like the earth swallowing him, as he stepped into the crack and continued into the ground.  And that was how it was done-- step onto a ledge a foot or so down in the crack, and lo and behold, there was a ladder leading down.

At the bottom we finally had a chance to see what we had gotten ourselves into.  And the amazement began.


Sculptures of rock, swirls and ripples and points and waves. 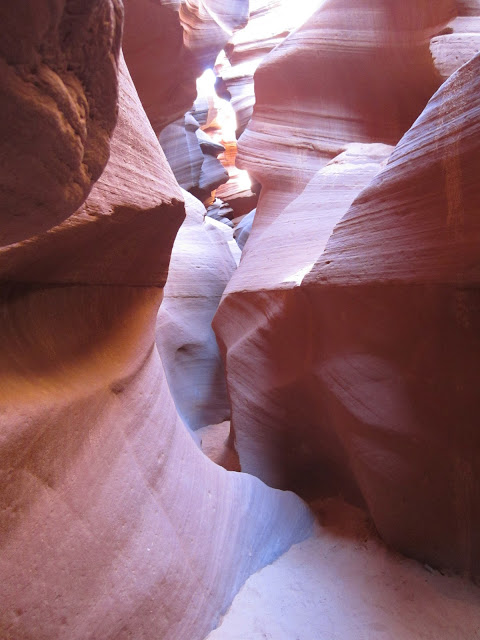 Interplays of light and shadow. 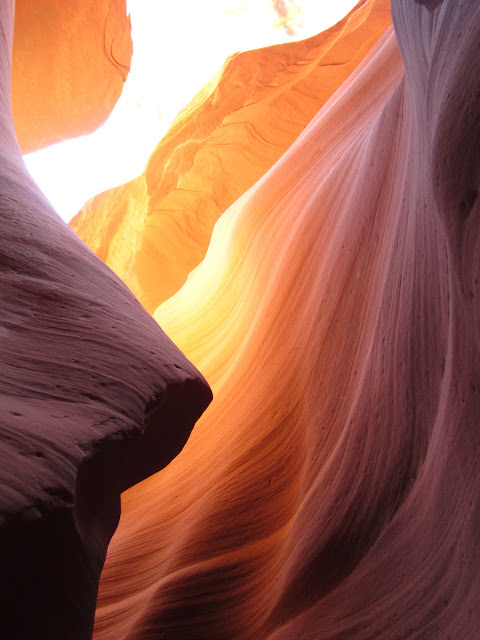 Shades of browns and oranges and purples. 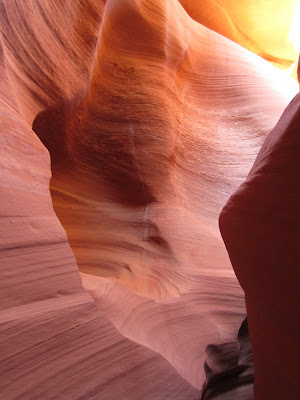 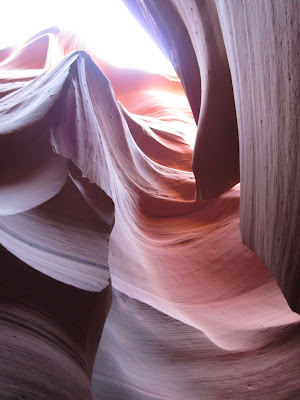 At times light from the near-noon sun would be visible through the crack in the ceiling of the canyon. 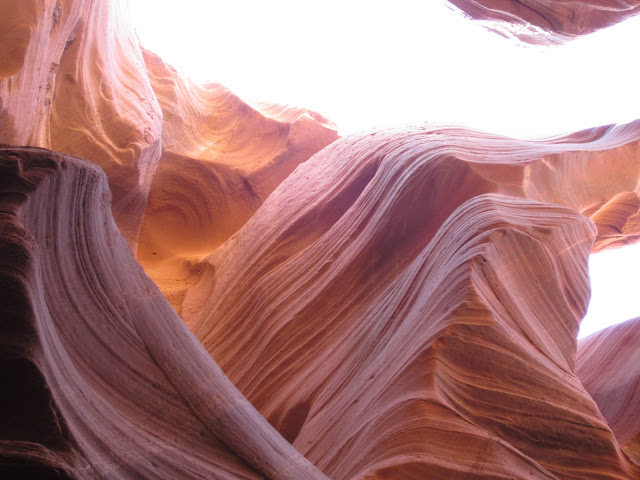 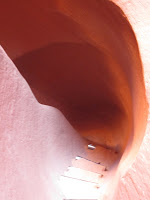 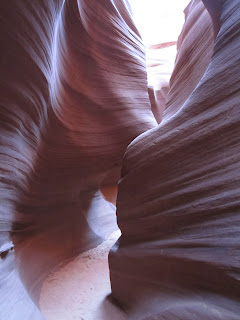 As we walked, the width of the canyon would vary, sometimes opening into a decent sized room that could hold 10-20 people, other times narrowing to a few feet at most.  The path often was only the width of your foot, forming a curving inverse balance beam of sorts.  At times more ladders were necessary- some only a few steps, some more than a story in height. 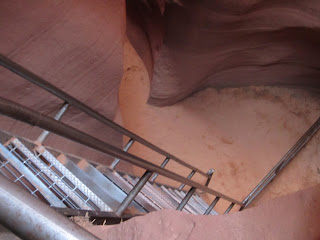 But around every curve and bend there was more- yet another formation that made you stop in your tracks.  It was interesting to see how a single formation changed as you walked around it, seeing different angles. 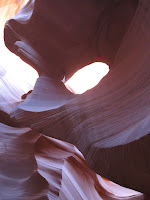 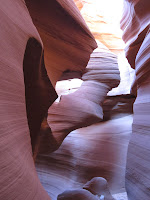 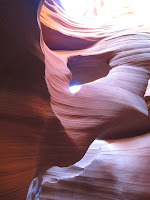 It was also interesting to see how my husband's camera and mine caught the light differently, yielding different pictures of the same scene.  At both canyons, photographer passes are available for those 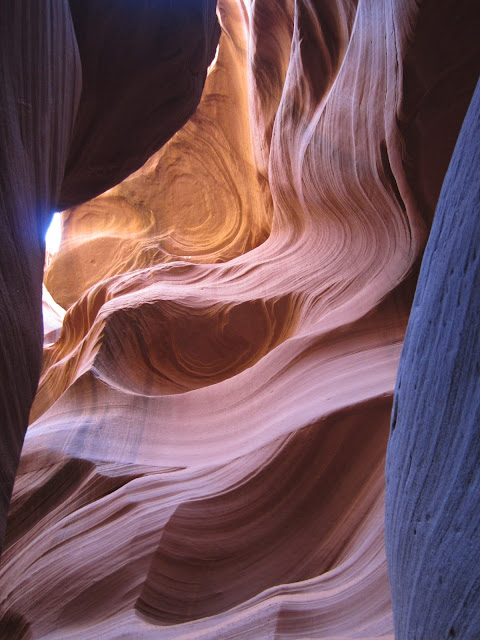 with SLR cameras wanting to spend more time (two hours instead of one) in the canyon in order to photograph in more detail.  Lacking a SLR camera and the extra time, the standard tour gave plenty of time for us to snap pictures as we walked, and to stop and just look.  The tendency is to succumb to the lure of the perfect photo, seeing everything through the viewfinder.  But what a shame it would be to get the perfect picture and never have seen it truly with your own eyes.  And so I forced myself at times to put the camera down and just look at the surreal beauty that surrounded me. 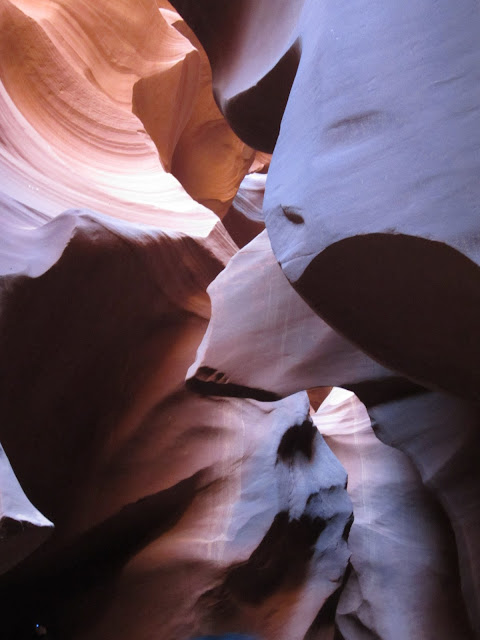 We reached the end of the trail- the canyon continued but, alas, the path did not and the ladders beckoned upward. 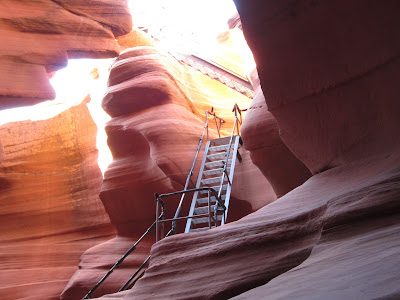 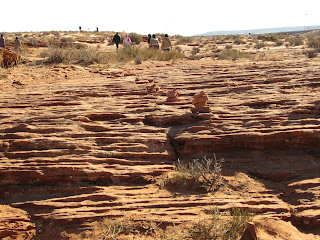 Our hour was up, and it was time to return to the surface.  Into the sun we climbed, squinting after the sheltered light at the bottom, and followed the path of stacked stones across the rippled rock back to the parking lot.  And it was not without a bit of reticence that we climbed back into the car to continue our trip to more varied and stunning sights.

Posted by RobinsFlight at 7:00 AM

All I can say is WOW! Since I am extremely claustrophobic, I could never see those wonderful sights without your pictures. Thanks.

Thank you for sharing your adventures. I'm in awe of the beauty

These natural formations are amazing! So very beautiful. Hope one day I may be lucky enough to experience the real thing but your photos are stunning. Thank you so much.

Awesome photos! It is on our wish list of one of the places we want to see, some day. Thanks for sharing.

Your article and photographs are marvelous. It is so moving and stunning to be able to vicariously experience your adventure there.

Wow! Amazing photos! I am so jealous! I want to go to the grand canyon! Even more now!

The previous comments used all the words I was thinking when looking at your photos; wow, amazing, stunning, awesome! Thank you for sharing. I'm sure it was an experience you will never forget.