A Fantastic Dog Show with a Surprise Ending!

For the past few years I have been in a love affair with Chinese Crested dogs! This unique and lovable breed isn’t the first choice of many folks. Chinese Cresteds come in both hairless and powder puff varieties. Most people, if they know anything about hairless dogs, have seen the entries in Ugliest Dog Contests! Not only are the hairless dogs sort of weird, ones who win those contests usually have very poor teeth and their tongues hang out! But those are dogs that have not been bred to bring out the best features of the breed. The dogs I have been around have very good features and to me they one of the most beautiful breeds. 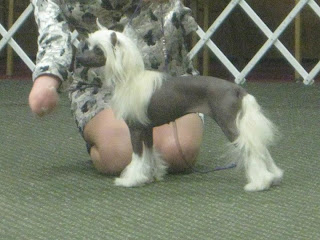 I was introduced to Cresteds by my friend Terry who has had a number of show dogs and puppies. When I was looking for a home business that I could do, Terry suggested I make dog clothes! Hairless cresteds often need jammies or coats to keep them warm. To make a long story short, I started Puttin on the Dog Designs in October 2009 and thinking that I could make clothes for Chinese Cresteds. The business and my products have evolved over the years to include embroidered items, but I still have specialty items for Chinese Cresteds.

The American Chinese Crested Club Nationals are usually held in mid-May in Oklahoma City. This year was the fourth show I have attended as a vendor. While other years there were 30-60 dogs entered, this was a bumper year with 160 entries. People from all over the country attended, and there were several international entries. It was a great opportunity to sell some specialty crested products. Terry, who also started doing embroidery, and I started months ahead to come up with some items that would appeal to crested owners. Fortunately, that preparation paid off! And, some rather last-minute options turned out to be great too! 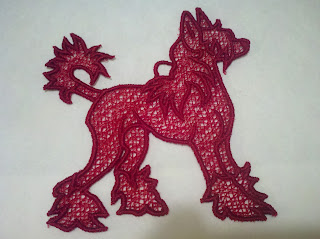 Our newest designs were Free Standing Lace ornaments of a hairless and powder puff crested. These ornaments are embroidered “in the hoop” which means they are stitched out on hooped water soluble stabilizer. When the design is finished, it is removed from the hoop and the stabilizer is rinsed out. What remains is a design that has satin stitch around the edge and both sides are finished. Our powder puff designs were done by two crested owners, and custom-digitized, so they were unique to our shop. 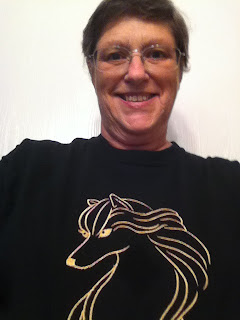 Another friend drew an exquisite crested head that fit nicely on a pillow top or t-shirt. The t-shirts were a big hit and I took orders for personal sizes and colors of t-shirts and then embroidered them at the show. This was the first time I took my embroidery machine to the show and it was a definite benefit to be able to embroider items on site. 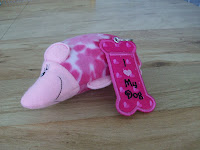 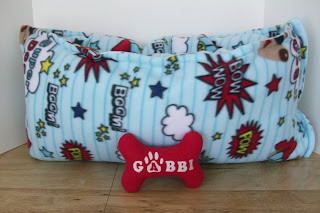 Pea pod beds, shaped like a pea pods, great for hairless crested who love to snuggle, were also very popular.

Dog show people have a culture all their own and crested folks are no exception. There are enough drama queens, both breeders and dogs, to do a soap opera cast proud. Competition is hot as each winner’s features and behaviors are dissected to fine points. Judges are either highly criticized or lavishly praised, depending of course on whether one’s dog won or lost. This goes on quietly around the ring and expands, sometimes loudly, over drinks and around dinner tables. One drawback of being a vendor is not being able to see any of the dogs in the ring, and I have never caught on to the show alphabet soup of all the designations of winners like WB, BOS, BOB, etc. And while most of those who are showing dogs know their competitor dogs by sight, I must admit that seeing over 100 dogs in one place, they soon all look alike!

The show ran from Wednesday through Sunday, and with all the late nights I had doing on-site t-shirt orders, I was ready to fly home Monday afternoon. Several nights of the week we had severe thunderstorms and a couple of those nights there were tornadoes warnings for the area. Since that was sort of the norm, I was surprised when a very severe thunderstorm with high winds and hail the size of golf balls hit in the early afternoon.

A couple friends and I were delayed going to the airport because of the storm, but when it calmed down a little, we headed in the shuttle to the airport. Arriving at the departure level, we saw car after car parked along the sidewalk with no drivers inside. An airport police officer came up to us and told the driver we weren’t cleared to be there! A tornado had been sighted within several miles of the airport and everyone in and around the airport had been evacuated to the tunnels under the airport. That tornado was the one that devastated the town of Moore, OK and a 17-mile swath around it. We were within a couple miles of the touchdown areas!

Within several minutes we were allowed to enter the airport and people were streaming from the tunnels trying to get on with their travels. Security lines were jammed with people desperate to get out of the city as soon as possible. It was still storming and people were glued to the TVs in the airport which were giving reports of local damage. It was surreal! I was beginning to think I would never get home. My flight went to St. Louis before going to Orlando and the same wall of storms that hit OK went as far north as St. Louis. I could see myself either stuck in Oklahoma or St. Louis overnight.

After over an hour of waiting, planes were at last allowed to land and our flight was one of the first ones to leave Oklahoma. After a very bumpy take-off we actually got to St. Louis in time to board the delayed flight to Orlando. I was so relieved to arrive home!

I will remember this year’s show because of the success of my booth, but also the surprise ending to this fantastic trip.
Posted by RobinsFlight at 7:00 AM

Now that was a trip to remember!

You offer such a wide variety of items - great idea bringing your embroidery machine to the show. Glad you got home safe and sound.

Quite a trip! Those T shirts look fab. I love the design. So nice you can work on things on the spot.

I love dog shows. Congrats on your success, and glad you got safely home.