Scheduling trips is an activity that I always enjoy.  I often have two or three in my mind at a time- not all definitely planned, but ideas of places we could go or things I'd like to see.  Before we had children, my husband and I were privileged to take quite a few nice trips, including an anniversary trip to Hawaii and a two week marathon trip along the west coast, stretching from San Francisco, CA,
to Vancouver, BC.  However, once kids were in the picture, our family vacations tended toward the "get there and sit there" variety, picking one location and staying there for an entire week.  This is definitely a nice way to relax, and limits packing and unpacking the mountains of things
kids must have when you're away from home. If you're interested, you can see my account of one of these family trips to the Sleeping Bear Dunes in last year's post.

But I found myself wishing we could go more places, see more, with the kids.  This was illustrated one day when my son was riding the back seat of the car while we were on the expressway that runs near our house.  This "highway" is actually below street level, and is built with little dips and rises so that any water on the road will drain toward the storm sewers.  But on our little trip that morning my son noticed that the road was "hilly."  Admittedly, our little corner of southeastern Michigan is rather flat- some would say extremely flat- but still, the dips in the road should not constitute "hills."  Clearly it was time for my kids to experience real hills.

And so for our vacation this year we decided to take the Lake Erie circle tour, with a detour into the Finger Lakes region of upstate New York.  The kids were excited that we'd get to see Niagara Falls, but other than that they really had no idea what we were going to see.
Then again, neither did I, as I'd never been to that area of New York before either.


Niagara Falls was fun for all.  We avoided the touristy areas that teem with souvenir shops and focused strictly on the falls itself.  The kids loved the Maid of the Mist, the Journey behind the Falls, and watching the fireworks over the falls from our fallsview hotel room.


Once on the American side, we found my daughter's highlight of the entire trip, the Cave of the Winds.  It was quite an experience, being virtually under the American Falls and so close.  Unfortunately, my son was rather intimidated by the experience, so I rushed through with him.  But we did stick around
long enough to see Daddy and Sister on the so-called hurricane deck, standing just feet in front of the raging falls.  It was not the only time I wished for a waterproof camera.


After those thrills, I was hoping the other destinations I had planned wouldn't seem anticlimactic.  And while I think the excitement of Niagara Falls was the most impressive to the kids, they definitely enjoyed the other sights we saw.

Our next stop was Letchworth State Park, about an hour and a half southeast of Niagara Falls.  It is home to three fairly large waterfalls.  Entering at the north entrance, we enjoyed a leisurely drive along the Genesee River, through the park to the falls at the southern end of the park.  The kids were a bit antsy until we found the falls, but they appreciated them once we got there.


The next day, we headed farther south and east to Corning, NY, home of the Corning Glass Museum.  While I was unsure just how welcome two occasionally rambunctious kids would be in a glass museum, it was actually very kid friendly.  In fact, admission for kids and even teens is free!  They have demonstrations of glass blowing, flameworking, and a glass breaking demo that we had to see twice!  And we splurged and made our own glass creations in their glass studio to take home as souvenirs. 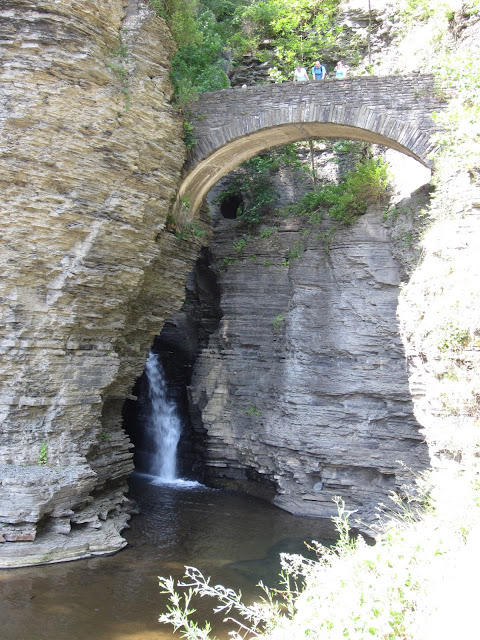 Our final day in the Finger Lakes region we spent at Watkins Glen State Park.  This gorge, located at the southern tip of Seneca Lake, is truly magnificent.  The first mile of the 1.5 mile gorge path ascends 400 feet through a gorge created by Glen Creek, and passes (or in some cases passes under) 19 separate waterfalls. 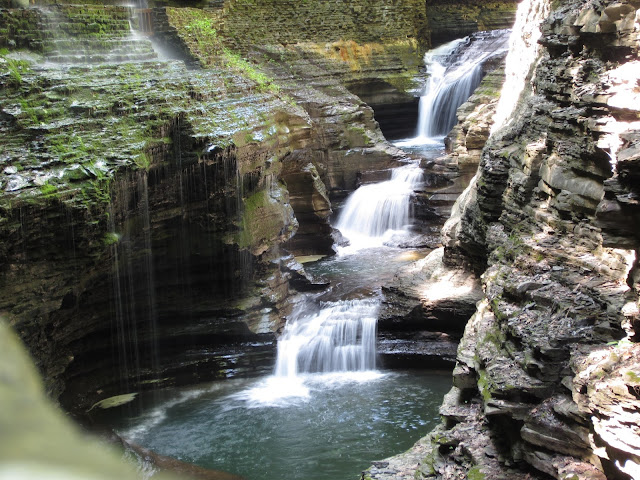 I was a bit concerned about the kids being able to handle the hike, but to my surprise they were full of energy, and the call of more and more waterfalls farther on kept them moving.  Of course, the promise of swimming at the pool which is also located at the state park may have also helped them keep moving, especially on the return trip back down.  We also found an interesting park with unique play equipment near the pool facility. 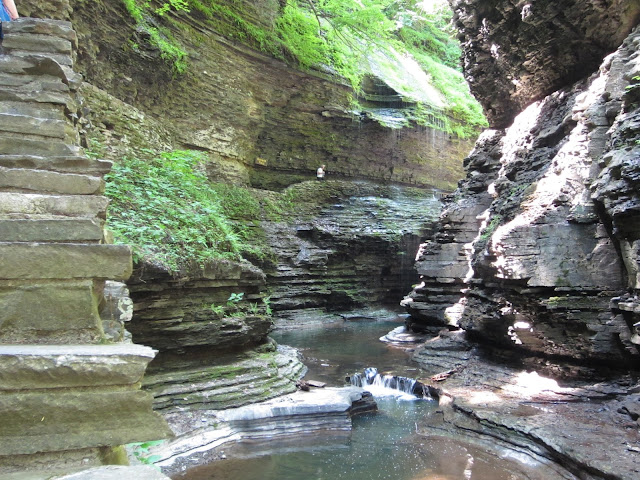 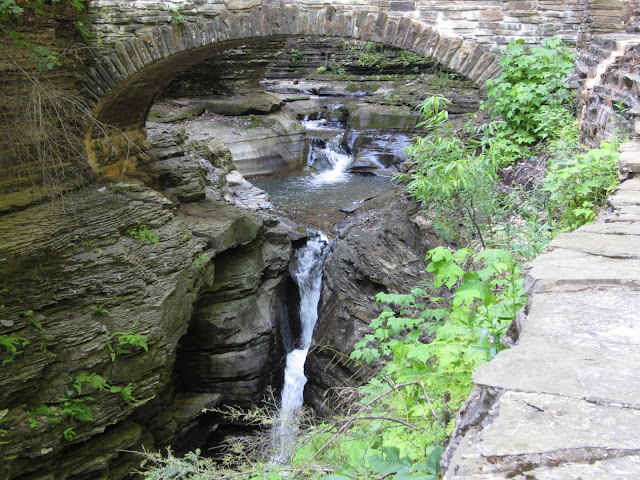 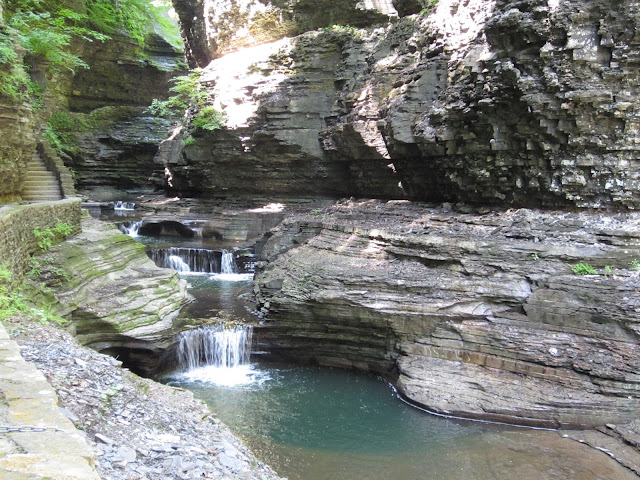 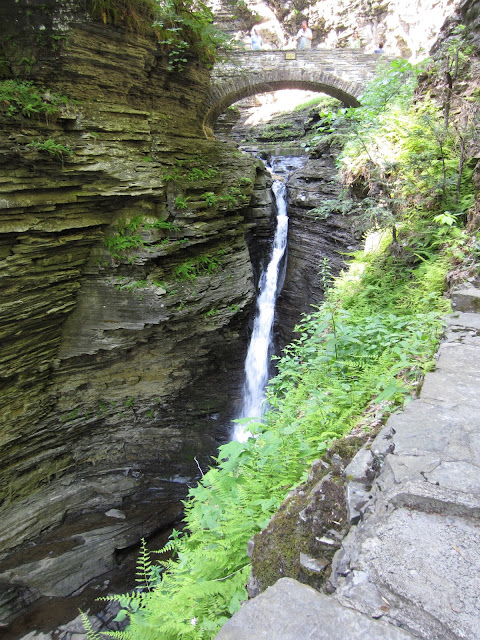 An evening trip into the city of Watkins Glen led us to a nice dinner overlooking the lake.  If we had had another day, we might have taken one of the boat tours that were advertised at the pier.

All in all, I think our first traveling vacation as a family was a definite success.  Granted, it wasn't one of those relax and forget it all kind of vacations.  But we'll make up for that next summer.  I think the Sleeping Bear Dunes are calling again.
Posted by RobinsFlight at 7:00 AM

Glad you and the kiddos were able to enjoy the trip. That is spectacular country.

Sounds like a trip your kids will never forget. I still have great memories of places my parents took us to see.

Beautiful! I think I need to put that on my bucket list.

What a wonderful trip! This needs to go on our list!