For years I have heard about the underground library in Camden, Maine. This year I was able to go and visit that library and just loved everything about it. 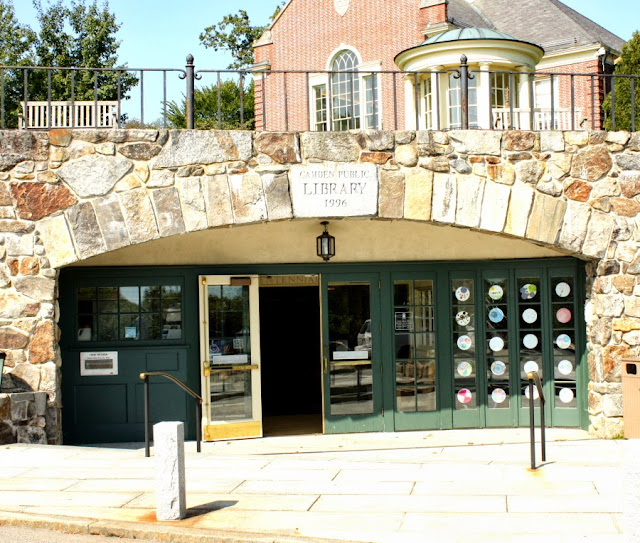 The residents of Camden voted in 1896 to form a free public library. It took many years to raise the funds for this construction. The land was donated by Mary Louise Curtis Bok. The land sits at the end of what is now a very busy town center on a plot of land that over looks a beautiful harbor. The library is a Colonial Revival building. The corner stone of the building was laid in August of 1927 and the doors to the library opened ten months later on June 11, 1928. You can see the original building in the above picture.

The grounds of the library were designed as an ampitheater and constructed between 1928 and 1931. Fletcher Steele was the architect and this is considered to be one of his best works. The two acre park across the street is known as Harbor Park and was designed by the Olmsted Brothers between 1928 and 1935. It is very informal compared to the structured design of the ampitheater across the street. The same donor gave the land for Harbor Park. Now it is the late 90’s and the library needs to expand. But where to do it. Do you destroy the ampitheater, move to another spot,or seek other options? Other options was the answer. So the library went underground. Under the South lawn was the option. In 1996 the expansion of the library was completed. A whole new wing – The Centennial Wing – provided more room for larger collections and computer based technology.

People enter the library through a large set of glass doors. (as seen in the first picture) You come into a rotunda shaped area that features the check out desk and information area. The computer area is light and bright. There are many seating areas throughout the room. The original library which is easily accessed by an elevator or a flight of stairs is still being used. The first floor of the building is used by the Historical Society. The second floor of the original building is the library reading room. 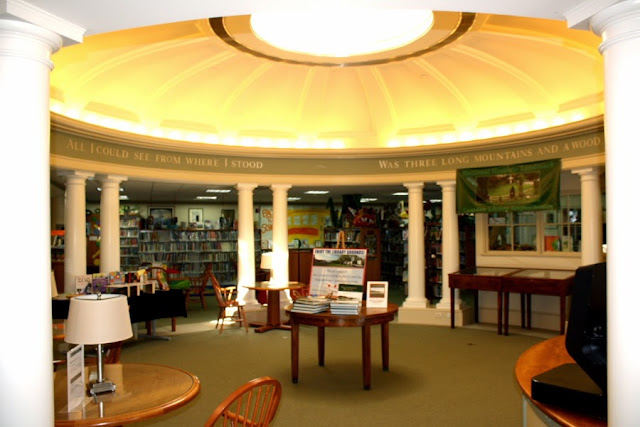 When we were there , the meeting room was being used as a gallery to showcase some of the quilted wall hangings of Linda Shepard. You can see her lunar moth hanging below: www.linda-shepard.com 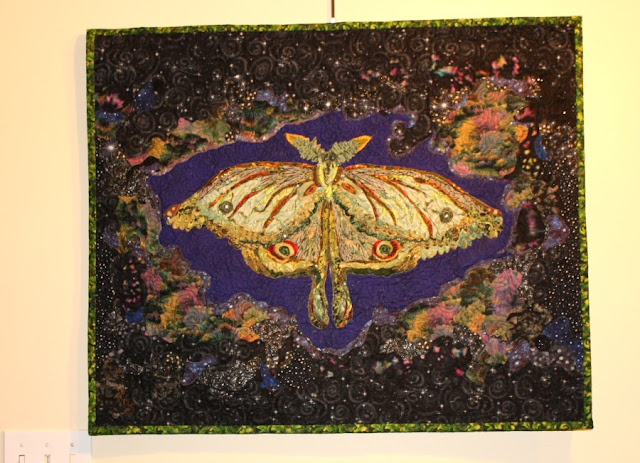 An underground library is neat!I Was trying to read the quotation around the dome. Funny how many names in USA have English equivalents. Camden is a borough in North West London. Maybe there is some connection? This one is far prettier and a lovely coastal position too.

Sew - I can not remember what the quotation is. Will look through some of my other pics and see if I can read it.

This is the poem written on the rotunda of the library. It is by Edna St. Vincent Millay

All I could see from where I stood
Was three long mountains and a wood.
I turned around and looked the other way
And saw three islands and a bay.

It is so appropriate for this location.

Such a clever idea, putting the addition underground. And a pretty setting also.

How neat! It's like a little cubby ... which is my favorite place to read!