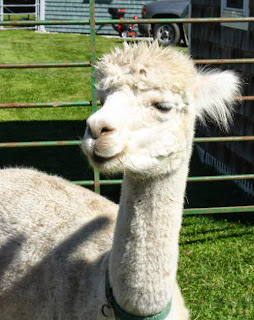 Have you ever noticed that when you are on vacation, you often go to things that you would not think of doing at home? I find that happens with us a lot. And that is how we found the alpacas.

I noticed an ad in the local newspaper that the the Maine State Alpaca Farmers were sponsoring an Open House one weekend we were away. It was a beautiful day and we had some time to idle away before meeting friends and decided it might be fun to go. Well, it was more than fun!

The Open House we attended was at The Evergreen Ridge Alpaca Farm in Warren, Maine. When we arrived there were a few cars and people wandering about.

We were greeted by these two happy people and were told we could sit and take a picture. I am not a picture person, so I passed on that opportunity. 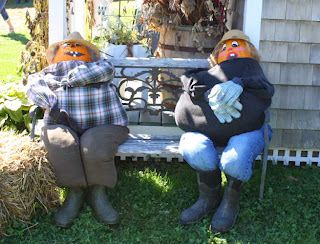 But my husband was happy to become an alpaca and have his picture taken. 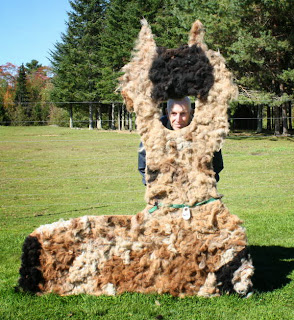 This particular farm has 32 alpacas. The boys are kept separate from the girls so there is no hanky panky going on. The owner of the farm told us that he likes to know the lineage of each alpaca. What we were able to pet and get up close to in the farm yard were the girls. The boys were off pronking (running and bouncing) in a nearby field. Each of the animals had a collar and a name tag. And they knew their names when called. 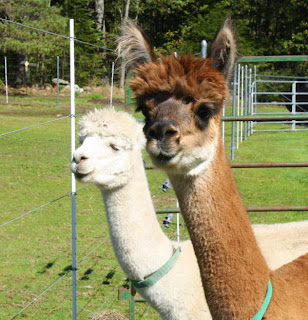 One of the interesting things I learned about alpacas is that they are related to a camel. And if you really look at their faces, you can see a slight family resemblance. I am not sure about camels, but alpacas have 3 stomachs.

These are Huacaya (wa-ki-ya) alpacas. Evergreen Ridge have show quality Huacaya Alpacas which produce an exceptionally desired-finely crimped fleece. There are 25 natural colors of alpaca fleece. And alpaca hair is the #1 fire retardant. These animals were sheared in March. 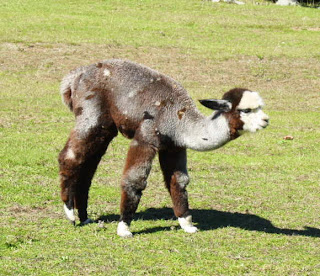 Alpacas do spit, but they do not bite. They only have bottom teeth. While we were there, many of them were enjoying a snack of green grass hay that the owner brings in from the Lancaster, PA area.
They also only have two toes on each foot. 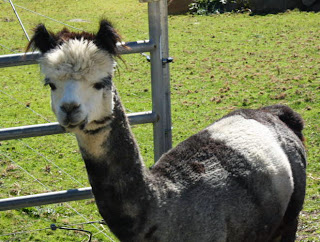 A female alpaca is a dam and the male is a sire. An alpaca pregnancy lasts 11.5 months. The baby alpaca is called a cria. They can live to be 25 years old. Alpacas can not be imported or exported. Makes you wonder how they got here.

In the end, I am glad that we took
the opportunity to learn a little more about the alpacas.

For more information, check out:

Posted by FabricGreetings at 4:00 AM

They are cute especially the baby cria.